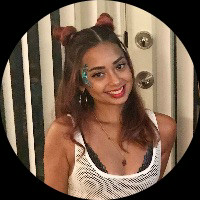 I was 15 years old when I was diagnosed with Systemic Lupus Erythematosus. It took almost a year for me to be diagnosed due to a lack of pronounced symptoms, but when every joint in my body was painfully swollen and I couldn't stay awake in classes despite a full night's sleep, they were able to confirm the lupus diagnosis and put me on medication.  Living with lupus was not easy, I was easily fatigued and I had periods of flare-ups that took a major toll on my body. Between the ages of 15 and 24, I had three major flare-ups that affected my body in a variety of ways. Fatigue and sleepiness was and still is my main symptom, but there was also joint and muscle pain, diminished function of my kidneys, brain fog, fevers, and a variety of other symptoms. All of these symptoms were fairly normal for someone with lupus, and although these flare-ups were difficult and painful, I always knew that it would be temporary and eventually I would go back to feeling "normal." That changed when I was 25, and my lupus affected me in a way that I never saw coming.

I had just started working at a new job as a Teacher's Aid for a Kindergarten class during a summer program. It was the end of the first full week and I felt more tired than usual, but I didn't think it was anything to be concerned about since I had spent the day at a field trip with a hundred elementary school children. I took a nap when I got home (my solution to most of my life's problems), expecting to feel better when I woke up. Instead, I woke up feeling worse, throwing up and having a fever. I was more concerned at this point as these were not my usual symptoms but decided to wait a while longer before calling the doctor. The next day I felt even worse, my fever continued, and I had the worst headache I had ever had in my life. I was at my parents' house, and we decided it was time for me to go to the emergency room. While at the emergency room, my pain spread to my back and my legs, and it was excrutiating. It was and still is to this day the worst pain I ever felt, and no pain medication alleviated the pain in any way. I was admitted to the hospital with the doctors and nurses perplexed as to what was causing me so much pain. The next day I was still in pain, though not as bad. At one point I sat up to go to the bathroom. I put my feet on the ground, stood up, and immediately fell. Although I could move and feel my legs, they had no strength. By the next day, I was completely paralyzed from the chest down. After a series of tests, the doctors determined that I had transverse myelitis, a disease in which there is an inflammation to the spinal cord that can cause paralysis. Transverse Myelitis can have a number of causes, lupus being one of them. Although I always knew that lupus could affect any part of the body, it never occurred to me that it could affect me in this way, and that it could cause permanent damage to my body. Although it is possible for there to be recovery after Transverse Myelitis, that was not the case with me.

From an Invisible to a Visible Disability

I have always been a fairly private and introverted person. I didn't talk to people much about my lupus and how it made me feel, I tried to keep it to myself so as not to worry the people that cared about me and also because I didn't want to feel like I was "different." When I became paralyzed, I could no longer hide that I was "different." After leaving the hospital and the inpatient rehabilitation center, I moved back in with my parents and began my life as a wheelchair user. It was not an easy transition. I was used to being independent and doing everything on my own, and I had to relearn how to do everything and I had to be dependent on others to do the simplest tasks. On top of that, I felt ashamed of my disability. I didn't want people to see me in a wheelchair and was scared that I would never be able to live a "normal" life. Fashion was something I was always interested in, I even majored in fashion design and merchandising as my undergraduate degree. But as a new person in a wheelchair I felt that what I wore and how I presented myself would no longer matter, I would always be seen first as "that girl in the wheelchair." I didn't think anyone would want to be friends with me, and I definitely didn't think any man would ever want to date me. I also was upset because shortly before becoming paralyzed, I had decided that I wanted to attend grad school out of state to get a Master's in Education. This had been a big decision for me because I had spent many years unhappy in my work life and had finally figured out what I wanted to do. Moving out of state was also something I had been wanting to do for a long time, but at that point I felt that no matter what I wanted to do in life, I would always be stopped by my disability. It took a long time to get used to my new reality, but the first step was to decide to apply for school anyways. I applied, and got into a program at Arizona State University, along with my sister who was also applying to Master's programs. For the first time since I had become paralyzed, I felt like my life wasn't over, and that I could still be happy and live a full life. From that point on my spirits continued to lift as I realized that I could still do whatever I wanted and I wasn't going to let my lupus or my paralysis get in the way of that.

It's been four years since I became paralyzed, 3 years since I moved to Phoenix, Arizona from Columbus, Ohio. I graduated with a Master's in Higher Education, have a job that I love working for Arizona State University, a boyfriend that I love, two wonderful dogs that I love, a new car (I'm still getting used to the hand controls but I'm working on it!) and am the happiest I've ever been in my 30 years of living. My paralysis and lupus still affect me on a daily basis, but I see them more as an inconvenience than as a major deterrent to my life. I'm still able to do all the things I want to do, in fact I do more now than I did before I was paralyzed. I travel to all kinds of places, I've made wonderful friends, and my fashion sense has not been diminished by my wheelchair. I'm still out here killing it and looking fabulous! I know that there are going to be people that will see me as "that girl in a wheelchair," but that no longer bothers me. I know who I am and what I have to offer, and know that there is more to me than my disabilities. I've done so much but still have so much left to do and I have no intention of slowing down. Life is an adventure and I plan on taking full advantage of it!

A 30 year old woman living her best life in Phoenix who just so happens to have lupus and is a T5 paraplegic.