yoocan - Karina & Zolan - Our Down syndrome Story, Our Diagnosis, Our Son

Our Down syndrome Story, Our Diagnosis, Our Son 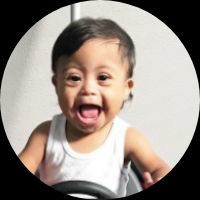 The Diagnosis: Down syndrome

02/16/2016 - Based on my menstrual diary, on a Tuesday, I realized I was 2 weeks late. I could no longer resist my curiosity so my husband and I decided to take a pregnancy test. Three very long minutes later I couldn't believe my eyes, the word "Yes" appeared on the test! I showed my husband and we both cried tears of what was a combination of happiness and WTF (well, the WTF was mainly my expression) I was still very much in shock but also very much excited.

03/31/2016 - We had our first trimester screening, I was 11 weeks + 4 days. During the ultrasound we noticed our sonographer was taking a little longer than expected. I remember asking her if everything was ok...she said yes, but didn't sound reassuring, I could see she was trying to focus. When she was done she said she was going to have the doctor review the ultrasound and she would be right back. Immediately my husband had a feeling that something wasn't right.

The sonographer entered the room with the doctor (My heart dropped) she grabbed a chair and sat right in front of me. She explained that they found extra fluid in the back of our baby's neck, it was at about 3.2 millimeters. I didn't understand what that meant.    [Measurements that are more than 3 millimeters may indicate the presence of Down syndrome or any another chromosomal disorder]    She said there was a possibility that our baby may have a genetic disorder, however, they couldn't verify it 100% unless we did further testing (I felt numb). They recommended us to speak to a genetics counselor to explain to us all our options for further prenatal testing.    It is still a woman's right to refuse any prenatal testing or make the decision to speak with a genetics counselor (And, I respect their decision). In my case, after hearing that my baby may have a chance of having a genetic disorder I wanted to know 100%. We needed to be mentally & emotionally prepared for what could be.    You could only imagine what my husband and I were going through. We were suppose to leave our first ultrasound full of excitement, instead we left feeling like our whole world came crashing down. No parent-to-be wants to hear that their baby may have a genetic disorder (or any disorder) but I kept telling myself that we didn't know 100% and that there was still hope. We also knew that NO MATTER the circumstances, we were going to love our baby unconditionally, that was never a doubt.   04/01/2016 - After meeting with a genetics counselor and intense research on prenatal screening and diagnostic testing options, we decided on Chorionic Villus Sampling (CVS) testing. This diagnostic test would give us high levels of accuracy (98-99%) results and would also provide us our baby's gender.    I had then asked myself "What are the odds?" Based on my maternal age (I'm 30) and continued research I was in the 1 in 900 bracket of having a baby with Down syndrome (these numbers gave me hope). They informed us that the test results could take up to 7-10 days, all we could do was pray.    It was Monday morning and we got the anticipated call from our genetics counselor. I put her on speaker so my husband and I could hear the results, as she was telling us that our baby would be born with Down Syndrome (Trisomy 21) there was complete silence- I felt like my heart was ripped out of me. I had a million questions (But I wasn't in the right state of mind) I asked if I could call her back, she agreed and understood. But before we ended the call we wanted to know the sex of our greatest blessing...she said it's a boy. My husband and I just looked at each other, we had a gut feeling the whole time.   I remember my husband shutting down, I've never seen him this hurt. We didn't know what to say to each other, we were both going through a roller coaster of emotions. I was scared, worried, confused, sad, and in disbelief. This was suppose to be the happiest time of our lives but seemed like a nightmare instead.

Down syndrome does not define our son

After getting myself somewhat together, I started researching everything about Down syndrome. I cried as I wrote down all my concerns; and after reading for hours, I knew that we weren't alone and that we were going to be ok. There is a whole community out there with many helpful organizations and local support groups that can guide you through it all. This information made me see things a little more clearly and gave me hope for my sons future.    Facing the unknown of a life with a child who has a disability will be hard and will have it's challenges...but which new mommy won't? His extra chromosome will not define him- it will only make him that much cooler. He's one of the lucky few.    My mother said to me: "God blesses special people with special babies" and from that moment on, I knew that this was my purpose in life. I know my son will teach me more than I could ever teach him.    And, this is the start to our journey 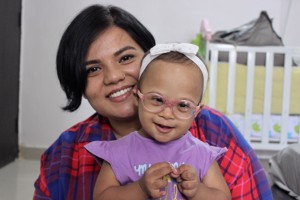 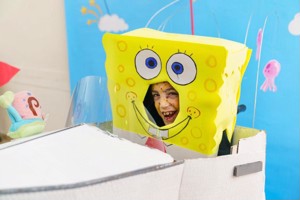 I am Karina, the mother of Zolan who happens to have Down syndrome. He rocks an extra chromosome with style.