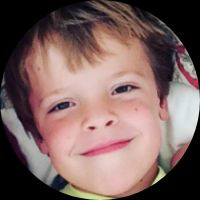 Hello! My name is Sarah, and I am the blogger/vlogger behind Raising Mr. Mischief. My blogs and vlogs highlight our family's triumphs and tribulations raising a child who is on the autism spectrum. I love to show the real face of autism, debunk myths, and highlight all of my son's successes.

To back up a bit, my son was born at 30 weeks old. We spent five weeks in the NICU where he was referred as a feeder grower. After five long weeks, we came home with our bundle of joy, and the advice given from doctors was that Mr. M would be a bit behind, however, he would have until the age of three to catch up. This is the lens that we looked through for the first two years of his life, it wasn't until his early intervention team suggested that he be tested for autism.

This came as a shock to us and we were completely blindsided and in denial that our son could be on the autism spectrum. We were in such deep denial the first year of his diagnosis was emotional and challenging, to say the least. The first couple of years post-Mr. M's diagnosis was extremely difficult to navigate services, find support, and recreational opportunities for our family. However, over the past four years, we have created an amazing entourage to support our family.

Our peeps, as I refer to them have helped Mr. M verbal abilities to explode over the past four years of services. Mr. M started therapy at the age of three, and at the time he was considered pre-verbal. Today at the age of seven he has a grade level vocabulary. Mr. M has also developed into a sweet, charming, honest, and pure young boy. His hobbies include adaptive soccer, basketball, skiing, and boy scouts. In between therapy and recreational activities, we have also recently started to travel abroad as a family. This summer we took two trips- one to Madrid and one to London.

My name is Andrew, otherwise known as Mr. Mischief. I am a very charming boy who happens to be on the autism spectrum.