yoocan - Inga Reichelt - A Major Part of The Cake #disabledandsexy

A Major Part of The Cake #disabledandsexy 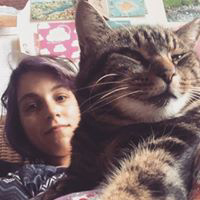 I had my first sexual encounter - if you can call it like that – not so long ago with a good friend of mine. He made it very clear from the beginning that his interest was purely sexual - no romantic feelings involved. Fine by me, since that was mutual. We were just gonna have some fun, nothing to worry about - I thought, at first. But I realized quickly that this thing confused me a lot – Frankly, it confused the hell out of me. I couldn't quite grasp this. Why was he interested in me in that way? What was there to be interested in? I didn't get it. This had NEVER happened to me before, and I had thought it never would.

See, I grew up in a world which never really recognized me as a sexual being. I don't remember when exactly I became aware of it, but it was quite clear to me at a young age that something was wrong with me, that I needed to be 'fixed' (through long strenuous hours of physical therapy) and that, certainly, I wasn't perceived as beautiful by anyone. My mom once told me that when I was 11 years old, my grandma said to her 'Inga would be such a pretty girl, if it weren't for her disability.'  It didn't surprise me at all to hear that my grandma had thought this way. It reflected the overall view I felt society had of me.

My family assumed for a long time that I had no sexual interests. I remember one particular instance where we had a family friend visiting us, and you know how sometimes family acquaintances ask you awkward questions and wanna know everything about your life when you are in your teens?? Well, as she was leaving, she turned to me and asked me: “So, Inga, do you have a boyfriend?” - and before I could even answer, my mom dismissed her question and said “Oh, Inga is not interested in boys yet.” I was 14. My mom was wrong. But I was so speechless about her blatant assumption that I felt very out of place. I just said: “You can't know that.”   At high school, I was rarely, if ever, included in conversations about relationships and sex, and if I was, it was assumed that I had nothing interesting to contribute. My friends almost never asked me whether I had a crush on anyone, and people often assumed I was single without asking me. In general, I got the impression that everyone considered me not 'datable'.  The fact that there are very few disabled women in romantic relationships shown in the media just made it worse. Though I wanted a boyfriend. I had all those feelings, just didn't rub them under people's noses. For a while in my teenage life, I even subscribed to the (in retrospect) ridiculous idea that if I could find an able-bodied boyfriend, I would have made it. I would finally be considered normal. He would be my way to blend in.

I went on a long, but beautiful journey of self-discovery...

Of course I thought about ways to rebel- I could dress overly sexually, make lots of sexualized jokes, attempt to make out with random guys- but see, that’s just not me. That’s not who I am and it's not what I like doing  (most of the time, at least). I didn’t want to compromise my identity just to rebel, just in order to make a point. I wanted to be myself, and still be recognized as a sexual being. And so, I played along. I accepted the box I was put into. I came to the conviction that if I ever were to have the luck of finding someone who would want to be with me in such a  way, who would come to see me as beautiful, then it must and only can be if he manages to somehow look 'past' my disability - you know, see the 'real' me. That I would have to be so convincing, so all-alluring, intelligent, funny, witty, strong and passionate that I would be able to compensate for my 'flawed' body. If I ever were to get sexual attention from anyone, it would be the icing on the cake. The amazing unthinkable extra. And now, what had happened? There was this guy, and he just gave me a pile of icing. Without the cake. And I didn't know how to handle all that icing. It seemed surreal. You know, of course I had heard about (and thought about) these friendships with benefits, casual arrangements, whatever you wanna call them – and the concept made perfect sense- it just didn't make sense in relation to me. I thought I would NEVER get that.   And there it was – icing without a cake. So we said we would have some fun, but that no one would have to know about it. And I ate the icing with delight. And it was fine.

and I am still travelling.

Until two days later when... I picked up this book. It was a book with stories of disabled people from all around the world. And it had this story about a disabled woman who would be visited by a man every week at a fixed time. And they would draw the curtains, and he would have sex with her, and leave again. None of his friends knew about her, he would never mention her, and he would certainly never be seen with her outside the bedroom. It had to be a secret. And then it hit me. Suddenly, there was this fear. This fear of always being in the shadow. That no one would ever be out. Out about being attracted to me, out about being into me, out about being involved with me, out about being with me. And that, worst of all, I’d never be out –about being myself. Would allow myself to be kept in denial, just because it was better than nothing. It seemed better than loneliness. And that even if I were to gather up the courage to step out of the shadow,  and assert my sexuality- Still, no one would ever proudly show me off as their partner, holding hands on the street for all the world to see, taking delight in public declaration of loving me. It sounds silly, but this is what I feared - a life without any public recognition, only being loved in darkness, where no one can see. It’s what I still fear sometimes. And I know, I know- we are all supposed to be completely content with ourselves, and never feel in need of a partner for completion- but with our society being constructed the way it is, valuing the things it does, where women are often treated as treasures to be shown off, that’s just not how the world works. So I was scared of falling into a pattern of denying myself the honor of recognition. I am scared. Scared of loneliness. And scarred by oppressive, narrow beauty norms. But as I ate the icing, three scoops full, some realizations came to me. For example, that I actually didn't want anyone to look 'past' my disability. My whole life, it had been the big 'DESPITE' - “Oh, Inga achieved this or that, despite having a disability.” SCREW THAT! Recognize my beauty fully. My body is part of me- it belongs to the package. I long for full acceptance. Love me WITH my disability – not in spite of it, and not because of it, just with it. I realized that being perceived as attractive by someone does not have to be & should not be just the icing. It can be a major part of the cake – an important yummy ingredient. Realizing all of this is a process, and I haven't completely gotten where I want to be yet. But I long to one day stand or sit in front of the mirror, look at myself, and say: “Yes, I am beautiful.” – And fully believe it. Feel it. Without a grain of a doubt. And it’s not out of a mere superficiality. It is coming to accept who I am. And celebrating it.

I write disability justice posts based on my experiences with Cerebral Palsy.