yoocan - Sharmika Dockery - Left in Chronic Pain After My C-Section

Left in Chronic Pain After My C-Section

I was 17 years old when I found out I was pregnant. I was very shocked at first, but always dreamed of having a beautiful baby and family so I decided to keep my blessing. My pregnancy went quite well health-wise and I continued to go on with my sixth term, but ended up having my son just a few months before I finished. During the 9 months, I went to college and had to leave due to discomfort but ended up doing my course from home in health and social level 3 extended diploma and left with D*D*D*.

I had an emergency C-section, because I wasn’t dilating. I remember waking up the next day, and seeing this beautiful baby boy. I coudlnt even believe he was mine he was so small and tiny and looked so peaceful. I don’t remember even holding Riley when he was born as I was so unwell. Riley’s dad told me about two years after that him and my mum were holding Riley on my breast that night to feed him. I missed the best first moments, which makes me the saddest. Whilst in the hospital, I saw all the other mums and of course they were all older. They looked fine and were just getting on with things, and I just thought, ‘well if they can do it, then I’m sure I can’, plus I didn’t want to look incapable ‘because one of my biggest fears was having Riley taken away, so I didn’t mention how much agony I was in. My blood pressure had also gone up straight after the birth and I was put on blood pressure tablets.

Midwives came out every day when I went home to check my blood pressure. I remember reading on a correspondence note to the midwives from my GP, ‘I know this patient and I’m not too sure about her mothering skills’. This obviously shocked me and I felt even more under pressure. I could hardly move and was waking up during the night in puddles of sweat having to change my bed sheets and clothes. I didn’t mention it at first as I had seen that note and didn’t want to seem like I couldn’t handle it. I physically couldn’t even bend down to pick up my son, I was in agony. I eventually mention my symptoms of changing my sheets and clothes at least 3-4 times a night to the midwife; she said it was due to me breastfeeding. 11 days later, a midwife came out and said my blood pressure and temperature was really high and that I had to go back into hospital. I was given antibiotics as I had an infection in my blood. I went home and then had to be rushed back in to hospital within a few hours. I was then told I had a womb infection, from the atmosphere of the operating room.

We begged for an ultrasound scan

The consultant came and did an ultra-scan and then I just remember the consultant saying, ‘she needs to stay close to me’ and rushed off. I was so confused as he didn’t explain what he saw, so I went on to ask another doctor who said it was the placenta. Within the next day, I was due to have surgery to remove the placenta but they said I couldn’t have the surgery anymore. They said it wasn’t an emergency, 'as my head was not falling off''which is fair enough, but just made me feel more and more like a young mum that was exaggerating. A nurse came to me and said ‘something wasn’t right here’ and within 10 minutes she had brought a surgeon up and I was being organized to go into surgery. They removed the placenta and blood clots and then within 24 hours, I went home. I started to feel better but still noticed an unusual pain that I’d never had before. I carried on for about a month and a half and then I saw my GP who said that it was down to the C-section. My stomach was swollen, red blotches all over, and it would sweat to the point where I could poor a glass of water of my stomach. I tried to get on with it but kept ending up on the floor in pain and in A&E pretty much every week for 9 months. I couldn’t eat or leave the house hardly, I was constantly bent over in pain, I could hardly put any pressure on my left leg and was constantly throwing up and loosing myself.

9 months and I was finally slightly heard

After 9 months, I was finally referred to a pain clinic. I had an epidural in my spine straight away for pain relief for a laparoscopy. They found adhesions, removed them and then discharge me. After having a nerve injection that sent shocks up my back and down my leg, the doctor abandoned the procedure during, and the pain clinic then refused to give me any further treatments. This was the worst feeling because my life had completely flipped around, I could hardly even look after my son properly. I was then put on Fentanyl patches and have had to remain on them for almost four years now, which has ended up taking a toll on my body as I have been rushed back to the hospital on numerous occasions with pancreittis. I have been told I have nerve entrapment, and had to have my scar reopened in Febuary of last year as two nerve branches were completely tangled around my scar. They also said I have severe nerve damage across my scar and down both my legs.

At my last gynaecology appoiment I was asked if I was finished having children.
I am now on a waiting list to see a radiologist for another invasive surgery to help for the pelvic congestion syndrome. I also now have a sprain in my hip and my spine is slanted to the right, which causes discomfort. This is due to the pain being so bad on the left side that I put more weight on the right side, which has twisted the spine. I am not sure if they really understand what’s happened or going on, which is very frustrating and I still feel like I’m battling at times, but things are getting there. Inspired by my experience, I have decided to create children’s books focusing on children and parents with disabilities as I have found it quite difficult to find the right words to explain to my son about my condition and why I am unable to do certain things with him.

The aim is to help children have a better understanding on what they or their parents might be going through. I’ll be talking more about this in my next blog  post along with how my condition has affected my life, so keep an eye out! 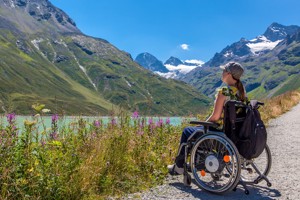 Is accessibility just an „optional luxury“? 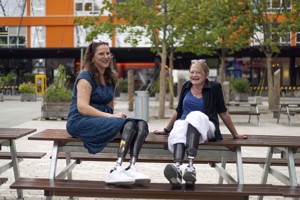 Amputeesupport- Your pain today can be someone`s light tomorrow. If amputation is the only choice you have, you are feeling afraid, ashamed, and maybe useless. At this point, it may help you to talk to somebody, wh…

I have been suffering from chronic pain since the birth of my first son.