Living a Life Full of Joy and Purpose as a Paraclimber 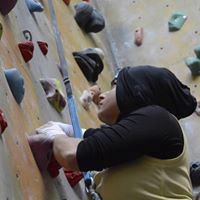 My arm is the least of my problems

I'm Anoushé (pronounced like Bombay!) and I was born with my right arm missing below the elbow. I like to think of my arm as my little arm and she (yes, she's a she!) is fierce. She actually does most of the grocery carrying and heavy work. Honestly, I've never had any major issues with my little arm aside from a bit of bullying in school and some pretty serious discrimination issues during my time as a martial artist. Everything has been pretty calm on the arm front. I'm kitted out with a range of prosthetics from my bebionic (prosthetic arm). I practice doing all sorts of interesting activities with my bebionic, such as wrapping presents and cooking. Then there are my sports arms, which help me do everything from handstands to carrying items. I don't wear my arms during my day-to-day though, I much prefer the feeling of freedom. I see my arms as additions to my body or tools that serve a purpose.

My parents were really supportive of me doing sports and encouraged me to join swimming as a kid and martial arts as a teenager. I was competitive in both and had issues with discrimination during my karate days. I loved the sport but I wasn't allowed to compete due to my arm (I was doing artistic forms, not combat). It was really tough handling that because I loved the sport but also felt like I was worth less and seen to be worth less than my classmates. It was only the love for the sport that kept me going. Sports have always been an escape from life for me. Eventually everything was sorted out and in my first competition I was thrashed by the Champion of Switzerland! I didn't mind, what mattered to me was competing, plus I'd only been told 4 weeks before that I was allowed to compete at all, so there wasn't enough prep time.

My body started to do weird things and then failed

During my time in martial arts, my right shoulder started subluxating. I didn't think it was serious, heck, I thought it was an awesome party trick. Unfortunately the doctors didn't agree and I started doing hours and hours of physio. On assessment, it became obvious that my shoulder wasn't the only wobbly joint. Suddenly, this kind of funny thing wasn't funny anymore. It was scary. No one understood why my joints were subluxating and why suddenly stable joints were becoming a problem. The week I won my first podium place in karate and was invited to join the national team, I was told by my doctors that I had to stop. They were convinced that karate was making things worse. It was awful, I had to drop karate just like that, something I was spending nearly 16 hours a week doing! It wasn't just a hobby, it had become a huge part of my life.

I was devastated and really struggled with the change in activity levels. My joints worsened. I focussed on finishing school and going to university. At least my joints couldn't take that away from me. No matter what I tried, my joints kept degrading and I started getting lined up for surgeries. I started blaming my body for failing me, for creating this unknown enemy.

Within 6 years of karate competitions, I went from that to struggling to walk any distance without being in pain and then I was diagnosed with cancer.

I was broken, I literally didn't know how I got through treatment. I guess I clung onto the fact that I was finishing my studies and had that to focus on. The treatment left me pretty wrecked and gave my left arm a lot of issues. I was struggling to raise it above my head long enough to wash my hair with it. That was a problem as there is no actual right hand to take over.

Turning my life around

We didn't know why I got the cancer that I did and so after my treatment, the doctors told me that the ball was in my court. They had done all they could, now I had to fight for my health. Chemo was pretty awful so I used that as my motivator to get myself back on my feet and build my fitness. Back then I struggled walking up a flight of stairs without being out of breath or a few minutes of walking. So I fought, I fought for every extra minute I could gain and within 3 years, I was walking my first 25km walk for charity. My left hand was still causing me trouble though. It hadn't adapted like the rest of my body and my joints were still slipping out of alignment constantly.

How I found a passion for Climbing

A friend suggested I try climbing as a way to force my left arm to get stronger quicker. I thought she was insane: climbing? With one arm? With an arm that doesn't work right? Following cancer? with joints that don't stay in place? Insane. I tried it anyway, I won't say no to trying new things. Worst case, I won't like it. Best case, I have found a new sport and I had been desperately trying to find something to fill the heartache that karate had left.

The first session was pretty awful, I couldn't get to the top of anything, my arm gave out within a few minutes, I was in a lot of pain and I was exhausted, but my joints stayed stable and above all, in those precious few minutes when I was trying to stay on the wall, I forgot about my issues and just felt a connection between myself and my body. A connection I had lost touch with.

This motivated me to get fitter and I kept going to the gym. Every few months I would try climbing again to see if I could manage some more. I didn't mind that I wasn't topping the wall. I wanted to see progress, any progress.

I took a break from climbing for 2 years while I moved to London and then I moved to where I'm living now. My flatmate at the time and I decided to start climbing together. We were both total amateurs but enjoyed learning together.

I had heard about climbing competitions for para-climbers and thought it would be interesting to see whether I could get my body to train again. I got a coach and we made really slow progress, but there was progress. My muscles started getting stronger and it became really obvious that something serious was going on with my joints. We realised I had Ehlers-Danlos Syndrome. Although I was devastated with the diagnosis, I was relieved to know I finally had a name and some tools to start really targeting the issues the right way.

I have been competing for 2 years now, I am fitter than I have ever been but above all, I am happier. Climbing is my passion, my escape, my self-care, my form of meditation. It makes everything better. My hope is to eventually become good enough to join Team GB! When I'm not at work or on the wall training hard, I share my day today life of living with the complex different issues I now have. I talk about what it's like feeling vulnerable or scared, feeling sick and in pain but I also talk about the good moments and how I stay resilient. I love working with people and charities to show them what they can do if they believe they can and that they are the biggest limiting factor in achieving their happiness and their own potential. I also give a lot of talks and write articles on a whole range of issues that I believe society does not talk about enough.

I also launched Paraclimbing London a couple of weeks back - it's a social climbing club for anyone who wants to climb who has a long term health condition (visible or invisible) or disability. It doesn't matter whether you have climbed before or not. I'm looking forward to seeing it grow this year!

My hope by sharing my journey on yoocan is that people can see that, no matter what happens, there is always hope and there is always choice. Hope helped me stay motivated but it was the constant choice to fight for my health that has gotten me to where I am today.

My life will never be normal but I don't think I want it to be. I wouldn't really be living a life worth living otherwise!

Thank you to Sana Murad, Rebecca Westcott, This Girl Can Climb, The British Mountaineering Council, Skyhook Adventures, Charlie Lowe and Sandy Carr for the shots.