I Can Do ANYTHING with End Stage Renal Disease 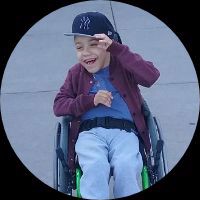 When I went to my ultrasound to find out what I was having, I found out that my baby had an enlarged kidney. I was told that I could abort him until I was up to 4 months pregnant, according to State Law, if my child was found to have any kind of abnormalities. I refused to terminate my pregnancy based on the fact that he was going to have challenges, which at that point, no one was even 100% sure of. As Joshua developed, I was told that he would never make it out of the delivery room and I was setting myself up for disappointment. I believed that, as long as my baby fought for himself, that I would do the same. He was born, not premature, but on time, by C-section.

Joshua is my inspiration and motivation

When Joshua was born, it was discovered that he had End stage renal disease. His kidneys were failing and due to them being enlarged, they did not allow his lungs to develop in utero. Yes, my baby was on an oscillator and ventilator when he was small. I was also told that he would never breathe on his own. There were a couple times that the doctors told me I could take him off his breathing machine and end his misery, as they described it. I went through a lot of mental abuse, from doctors and nurses as well. My baby though, he was a fighter. Despite the punctured lung right after birth, he persisted. He was able to advance from the oscillator fast, then the ventilator took a little while, but he was breathing on his own by the time he was 2 months. Joshua continues to defy the odds everyday. I learned and performed peritoneal dialysis on my son until he received his kidney transplant just before his 3rd birthday. He is unable to walk YET, due to a diagnosis of Cerebral Palsy, but WE know he will do it. We just celebrated 4 years post transplant and he is doing Great!! His favorite line is "I can do ANYTHING" and he is absolutely right. He loves basketball and horseback riding. In his own time, he will do it ALL!!  I am forever grateful for the miracle that God blessed me with. He is my biggest inspiration and my motivation.

I am a 7 year old Kidney transplant recipient living with ESRD. I am unable to YET, but I get around with my gait trainer and wheelchair just fine.