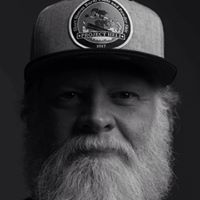 I want to pass along a story of a journey and awakening, one which Myself and many others were part of.

My BFF isn't what you'd call normal by any sense of the word. She is extraordinary, if not unconventional. In the spring of 2017, we embarked on a journey that had begun in earnest 12 months prior. But the result of that journey was an unexpected and welcome surprise and I think it's best explained in her own words. so without further ado, the words of my BFF, Grace Brulotte AKA: Gracie Lou Whatwontshedo........

My mother always taught me it was unladylike to swear. And yet, with the gradual whir of the helicopter rotors I went through every swear word I knew, and probably a few made up ones too. When one believes, whether founded in the truth or not, that death is too close for comfort, the mind tends to race as far away from reality as it can. She was with me then, whispering to dive far beyond my comfort zone. I don’t always want to listen to her, but in this case, I had no choice. I could risk being decapitated by the razor-sharp blades of the helicopter in trying to escape or face my fears like the mature woman I pretended to be and stay strapped in my seat. Reality has the ability to make a fool out of the best of us though because the very moment my winged transportation left the ground I forgot all my melodramatic absurdities. Like a phoenix rising to meet the sun, so was my soul breaking free from its bondage. I can only describe the feeling as taking a breath of life for the very first time. Acting like an adult being the farthest thing from my mind, I began to laugh and cry all at once as if I was rediscovering my childhood innocence and wonder again. She was right, as is usually the case.

I can honestly say that the excitement of the helicopter taking off is rivaled by the anticipation of it landing. The doors flew open, and myself and my companions carefully lowered ourselves into the waist deep snow of the mountain peak we had just been set upon. And then came the revelation… I found myself perched on the top of a mountain, whose mysteries were yet to be awakened. My heart was immediately overwhelmed by the visions of majestic beauty that were before me. Light has always been a fascination of mine, but when it is cast on snow of the purest whites, it seems to dance and sparkle like no earthly diamond could display. These blankets of snow were seemingly untouched by any living creature. It seemed as though we were in a different world, one where sorrows and hardships could not reach us. The peaceful quiet of this mountain haven is a sensation I to this day struggle to describe. If I were to try, the only conclusion I can make is that the sights and sounds must be as close to heaven as one can imagine.

My musings were interrupted by the realization that it didn’t matter if I would be satisfied with just the helicopter ride and the view. She wouldn’t let me daydream all day, not when there were adventures to be had. I can remember heaving in deep breaths as I watched my guide float effortlessly through his first few turns. My heart began to thump, my chest tightened, and as I held in my final breath, I imagined the line I was going to choose. I had heard the term “powder eights” used in the skier world, and though in general I try to be a nonconformist, in this case I had to know what they felt like. Exhaling one final time, my courage rose up within me, and I dropped in for my first carve in the snow. From that point on I will always associate cutting in a new line on skis with having butterflies in the stomach. There is nothing more satisfying than carving into the untouched terrain before you. I had hoped that my first few turns would feel like floating on air or bouncing on fluffy clouds, and I was overjoyed to find that they were. Clouds of snow formed around me as I glided from side to side, tickling my cheeks and forming a smile on my lips. I found my rhythm with my guide, and echoed his movements in perfect harmony. And when we both stopped, unable to wipe the gigantic grins from our faces, we looked back on the magical figure eights we had just drawn in the snow. The helicopter glided over them as if to approve our artistic efforts.

My ski partner, the man whose heart beats to the same rhythm as mine, gave out a light chuckle which only reflected what everyone was feeling. My body may not have left the sit ski which I was securely strapped into, my physical limitations may not have been altered, but my soul in that moment was truly freed. I had for as long as I could remember chased the feeling of freedom. I learned a great lesson that day, the value of which transcends simply skiing on a mountainside. My body may still be bound, but my heart and soul is free to have experiences without limits. My powder eights in the snow were proof enough that you don’t need an able body to experience life’s pleasures. Just an able mind and the tenacity to see it through.

It was in that experience, one I will never forget as long as I live, that I really grew to appreciate her. All my life I had been told what I could and could not achieve. And yet, her voice was always there, beckoning me to a version of myself I could scarcely recognize. This is the magic of Gracie Lou Whatwontshedo. Who is this mythical creature whose influence challenges the souls of mere mortals like myself? To put it simply, Gracie Lou or whatever name is chosen to represent it, is the undeniable spirit we have within us. A spirit that tells us we can go beyond what is deemed impossible. It is the voice that calls us to be courageous, to be tenacious, to achieve our dreams and reach for the stars. In whatever circumstance, whether it be fighting a personal demon or finding the strength to be a pioneer, we all have the capacity to be exactly what we want to be. Though it took me a long time to recognize her presence, I have come to realize that Gracie Lou was apart of me all along. She is always there, daring me to find myself through the experiences I have. And so I continue to seek adventures beyond my limitations. With Gracie Lou in my heart, there really is no telling what I’ll do.

By now you all have come to the realization that my BFF has lived her entire life with a disability. She was born with Arthrogryposis and Scoliosis, but has yet to let that limit her desire to live life to its fullest and continue to prove that nothing is impossible, no barrier insurmountable. She has a list of accolades to her name that would make you think she is just as able-bodied as the next gal. Journalist, Author, Founder of 2 Non-Profits, President of a Non-profit, First female Tandem Sit Skier to Heli Ski in Canada, Presenter to the Senate, Paralympic Reporter and the list goes on. Oh, did I mention she's only 22 years old?..... don't let age or disability prevent you from living the fullest life possible. I am proud to call her my BFF and be a part of her journey.

I am a CADS Certified ski coach, professional photographer and caregiver. I reside in the small Rocky Mountain community of Fernie British Columbia Canada where the adventures are plentiful and the possibilities endless.