2018- The year of trials and triumphs 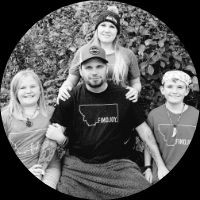 2018 was by far the hardest year for my family and I. On May 20, 2018, my 9 year old (10 now) son, Cash was in a terrible accident while doing what he loves...racing his dirt bike. He went over the bars off a jump, landing on his head. My husband and I rushed to his side, when we got to him he was completely lifeless. We had no idea what was happening, what seemed like an eternity was only about a few seconds and he finally took a deep breath, laying in the dirt, completely unconscious. He was ambulanced to our local hospital, still not conscious. Doctors told us they couldnt help him at our hospital and so he needed to be life flighted to another hospital 4 hours away from home. I flew with him, never leaving my boy's side, not knowing the extent of his injury, if he was going to live or die. My husband had to drive 4 hours to be with us. When we got to the children's hospital in Kalispell, Montana, they did extensive MRI's, CT scans, xrays, and tests. The next day they finally were able to tell us the diagnosis, he sustained a stage 3 diffuse axonal brain injury. He was he was put in pediatric ICU and in a coma for 4 days. When he finally started to wake from the coma and opened his eyes, this was one of the best days of my life. You never know how much you long to see the eyes of your child open until you can't. After he was as fully awake, he started fighting every tube and device in and on his body. It was heartbreaking to watch. He spent one week in the ICU, then transferred to inpatient rehab at the hospital where he spent another 33 days learning to walk, talk, swallow, feed himself and basically do life all over again. He didn't talk for 2 weeks, his brain injury was so severe, they didn't know if he would recover, it was a matter of time to see what would get back of our little boy. Slowly, each day he started coming becoming more himself. I stayed with him the entire time. The words he spoke for the first time after the accident we're "Hi mama", I will cherish those words forever. After he was released he spent 3 months doing outpatient rehab until school started. Cash is still recovering now. He does have some pretty severe short term memory loss, which makes school tough for him, he has sleeping issues which we work through everynight. He cant be in a place with loud noises or lights, we need to minimize all stimulation for him as it causes the memory loss to be worse, headaches and nausea. His personality has changed some but he is still the lively fun little boy we have always had. I thank God everyday for saving my boy. He truly is a miracle, a champion of traumatic brain injury.

On September 2, 2018, just 3 months after our sons injury, my husband Bill was riding his dirt bike in the mountains when he hit a stump he couldn't see, sending the bike flying over him and landing on the back of his head. We didn't know how severe his injury was until he was life-flighted to a hospital 2 hours away, where they discovered he had broken the C6 and C7 vertebrae. The doctor there said it was the worst break he had seen in 30 years and he couldn't help him so he and I were immediately put on a mercy flight to Seattle, WA Harborview Medical Center. They performed surgery and told Bill and I he would be a quadriplegic, that the spinal cord damage was so severe he would never walk again. He was diagnosed as an incomplete spinal cord injury, ASIA test level B. He spent 8 days in the neuroscience ICU, from there he was transferred to the in-patient rehab floor where he would spend another 7 weeks. I stayed out there with him the entire duration. Being 13 hours away from my daughter and recovering son was one of the hardest things ever. Luckily I have wonderful family and friends who jumped in and helped with my kids, dogs, and home while we were away. In rehab, Bill was taught to live life in a wheelchair but that wasn't good enough for him. He pushed himself to the limits daily. It started with a small foot twitch and in 7 weeks turned into being able to take a few steps with a machine helping support his weight and therapists helping advance his legs forward. After he was released from the hospital, we came back home to Montana, Bill was using a wheelchair at first and he immediately started outpatient therapy. There he moved to only using a walker to walk. He works very hard in therapy and daily life. Today he is using only a cane to walk. He still has a long road of recovery and only God knows how fully he will recover, but he has surpassed every doctor and therapist expectations of recovery! He is truly a walking miracle! Bill's hands function at this time is lagging behind his leg function but he continues to improve there too! Bill is the only money earner in our household and this put a ton of stress on our family's financial situation. I wasn't working at the time of Bill's accident because I was home to care for Cash after his accident. Now I am Bill and Cash's full-time caregiver. We also have a 12-year-old daughter who loves to help care for her dad, loves school and cheerleading! We are trying our best to keep her going in cheer so she has some normalcy in her life that was completely turned upside down. Bill is pushing himself to get back to what he was pre-accident so he can go back to work and provide for our family. We pray this will happen, God is good!

Wife and mom. My son is a brain injury survivor. My husband is a spinal cord injury survivor. My daughter is the best! My dogs are crazy adorable! Montana born and raised-406 for life. Mountains, motocross, hiking and helping others is what I live for.