yoocan - Felix Gretarsson - HAPPINESS - How to attain and maintain

HAPPINESS - How to attain and maintain

In a world where perfectly healthy people take their own life for no apparent reason, except not seeing any reason to live, I think the topic of happiness is very relevant and important. Is happiness a luxury only for the privileged? Do I need the perfect relationship, environment, house, job, or the right amount of money to be happy?   Most of us know that's not the case but still, we can feel miserable. Some have a voice in our head tells us, happiness is not about having what you want, but wanting what you have“. So now we can add guilt to our misery and feel even worse. WHY CAN‘T I BE HAPPY WITH WHAT I HAVE? WHAT'S WRONG WITH ME?“

Before I get into that, I need to go briefly into my own story. I was born in the early seventies, in Reykjavik, Iceland. I‘m the middle of my two brothers and had hard working parents. Raising a family wasn‘t particularly easy there in those days but being a child was lovely. We almost never got what we wanted and didn‘t spend very much time with our parents. But we were happy. We spent our time after school to play with the neighborhood kids. Those kids didn‘t have much either so what was lacking we just imagine we had. You could just use a sheep's jaw for a gun and build ships out of old pallets. One beautiful day, me and my older brother went on a bicycle tour with two of our neighborhood friends. That trip ended when we watched one of them getting crushed under the back wheel of a truck. A little darkness slipped into our lives that day. My brother, who was the oldest in the group (at the age of 10) took it the hardest. He somehow felt he was responsible.

Shortly after that, we moved into another neighborhood, but the playful innocence had been diminished. I didn‘t connect the same with kids who still had that, so other kids hurrying into adulthood were more exciting. Smoking cigarettes, petty thieving, and soon sniffing glue. For some reason, things that could take us a bit away from reality. I struggled in my teenage years and got addicted to drugs and drinking. It was so bad that at the age of 18 I was in my first rehab. After that, I managed to get a little hold of reality, got a job at the local power company and started to learn to be an electrician. I fathered two beautiful little girls and life was good.

In January 1998, everything changed. When working on a high voltage transmission line I was electrocuted and fell 10 meters to frozen ground. My arms burned so badly that they had to be amputated, my spine broke in three places and I fractured the neck joints. I woke up 3 months later, scared and confused about what had happened. How could this have happened? What kind of a life could I possibly have from now on? Those questions soon had to move for more urgent matters. My liver was dying and I had constant infections in the stubs where my hands used to be. For the next 11 months, I was constantly having a new surgery trying to cut away the infection and save as much as possible of the remaining stubs. Finally, we managed to stop the infection but there were no arms left. Maybe 7 or 8 cm on the right side but only a shoulder on the left. After those battles, my body slowly started to heal. Everything except the liver. As the liver got worse, I got skinnier and my complex became yellow. Medical reasons for keeping me on drugs went away and reality kicked in. The pressure on my relationship grew and we ended up going our separate ways. I moved into my parent's garage and did the only thing I knew to make this life tolerable. I dove head-on into drugs. And why shouldn‘t I? I had lost everything. My health, arms, girlfriend, daughters, job, all gone. I was sick, weak, skinny and ugly. And probably dying on top of everything since this bloody liver wasn‘t getting any better. I told myself that my drug abuse couldn‘t be to blame because I only used natural stuff. Weed and Cocaine are made out of plants, and I deserved it.   Eventually, the party came to an end. I was dying, I needed a liver transplant but due to my drug abuse that wasn‘t an option. I was told that if I could remain sober for a year they‘d reconsider. That meant that if I was to live, I‘d have to be SOBER.   "Son Of a Bitch, Everything‘s Real.“   I would have to find happiness in a hopeless situation or else kick the bucket. One would think those were easy options, but for me, they weren‘t. Fortunately, I chose life and after 7 months of sobriety, I was put on a transplant list. In the summer of 2002, I got the call. A liver was waiting for me in Denmark. Four years of sickness were finally coming to an end. The government had a special plane waiting for me at the airport and I flew with my family to do the final chapter. It went well and I could go back home a few weeks later but after one week in Iceland, I started to get really sick. I don‘t remember much from the following days but I woke up, back in Denmark with tubes from my new liver and some brown stuff leaking from it. The new liver was failing and I needed another a.s.a.p. Exactly two months after my initial transplant, I had the second one. An organ transplant can put a lot of strain on a person but TWO! Never in my life had I been through so much pain and despair. I was physically exhausted and my spirit was in pieces. A man who had a transplant shortly before me never came out of intensive care. He couldn‘t cope with the idea that he had an organ from someone else so he just died. His head killed him. A young woman was in the next room to me and one day she also died. It felt like death and despair was all that was left. I should be happy with my new liver so I could live long a miserable life, unable to take care of my basic needs, living in my parent's garage, alone. I knew that armless electricians weren‘t in high demand and women sure weren‘t lining up for them either.

Now you might think, "that sucks, but what the fudge does that have to do with me?“ Well, nothing really. The reason I decided to write briefly about my story is that regardless of childhood trauma and disability, I‘m happy. And I don‘t mean happy like I‘m in Disney Land. I mean I‘m generally happy and have been almost since I left the hospital in Denmark. I have good days and some not so good. But the darkness I experienced in Denmark in August 2002 has never returned. I was faced with the reality that this was my situation and I could resist it or except it. So I accepted it. Immediately when I did, everything changed. WOW, how could things possibly change so fast? My brain started to have 100x the processing power. Instead of focusing on what I didn‘t have, I started finding solutions. I read every literature I could set my eyes on regarding spirituality and personal development. My misfortune didn‘t define me, it made me stronger. I didn‘t get what I wanted but like the little boy with the sheep jaws, I discovered that I‘m so much more than I could have ever imagined. I set myself a goal that I was going to get new arms. Even though it had never been done. They already started grafting hands on people, so why not the whole arm, or two? I wrote to hospitals that were doing this with no luck until a famous French doctor came to Iceland as a keynote speaker on face transplants. Because of my goal, I saw the opportunity presented and started calling every hotel in the phone book until I found the one he was staying at. This was in 2007 and now when I write this in March 2019, I still haven‘t had my transplant. But that's fine. The goal gave me a direction and I am already on the waiting list for the donor. I will get the arms but they won't make me any happier. The happiness came from the journey. I have a beautiful life with my loving wife and two dogs. I have a very good relationship with my family and I‘m a grandpa. Today, I'm a life coach and a speaker. I choose a meaningful life. I have a vision for my life and that includes touching as many lives as possible. That's the purpose of my struggles. I gave them that purpose and they became an asset. I create my happiness. 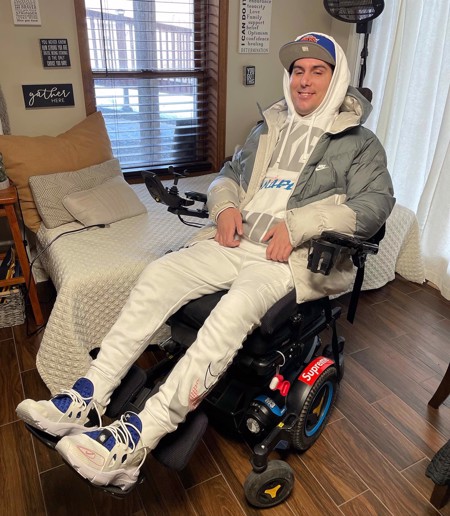 I'm a life coach, speaker, husband and a father. Currently living in Lyon, France waiting for an arm transplant donor.