yoocan - Amber - Our Experience with Apraxia of Speech

Our Experience with Apraxia of Speech 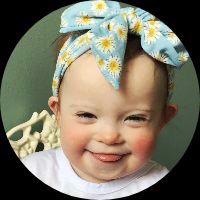 Not A Common Condition

Meet Kara. She is 3.5 years old, loves Toy Story & has the most beautiful blue eyes you've ever seen.
She also has apraxia of speech alongside Down syndrome.

Apraxia of speech is a motor planning disorder where the brain & mouth have trouble communicating. Kara knows what she wants to say, but her mouth can't remember how to produce the necessary sounds.
This is not a common condition, though it is more prevalent in those with genetic disorders.

I say that Kara has apraxia of speech, but the truth is, she has suspected apraxia of speech. It is very difficult to obtain an official diagnosis at a young age because of a lack of words. However, there isn't a doctor or therapist on her team that disagrees.

We've noticed many signs & symptoms of apraxia of speech with Kara. For example:

-She has shown regression. At one year old, she saying "dada" very clearly until she suddenly couldn't anymore. This word didn't come back until recently.

-It is hard for her to change pitch in her voice. Her sounds are usually very monotone.

-Another sign is that she has trouble stopping once she gets going. So instead of saying "mama", a lot of times she'll call me "mamamama".

-Lastly, she has trouble synchronizing her breath to develop louder noises. Most of the time, she says things at almost a whisper.

I have learned that the biggest part of overcoming apraxia is REPETITION. We have to teach her brain & oral muscles to work together so we practice the same words, phrases & sounds repeatedly throughout each day until they are mastered.

She works very hard to reach her milestones & it is very inspiring!

In addition, we are eternally thankful for her therapists. A great SLP (speech-language pathologist) will provide the best possible treatment for that child no matter the diagnosis. Kara gets exactly what she needs even though she doesn't have an official apraxia diagnosis.

Not to be Feared

Kara does a great job of communicating. The key was giving her multiple avenues to communicate through like sign language, visual cues, pictures, etc. With lots of hard work & support, I have every confidence that she'll be carrying around a hefty vocabulary someday. In the meantime, we will rejoice in every little achievement!

About Welcome! This is Kara (aka Baby Lemonade). She kind of fell backwards into this nickname after we announced the news that she was going to be born with Down syndrome – I had used the tags #whenlifehandsyoulemons #babylemonade...... Since we didn’t have a name picked out, everyone started calling her Baby Lemonade and the rest is history...... I am an open book. I am not easily offended by questions as I blog about the ups & downs of being a special needs mom. My intent on sharing our journey is to provide some insight on what it REALLY looks like to raise my daughter with Down syndrome. From this I want to see acceptance & awareness. I want to show society that a person has WORTH regardless of how many chromosomes they have......