yoocan - Fabrizio Passetti - I am an amputee Surfer, I love my sport

I am an amputee Surfer, I love my sport 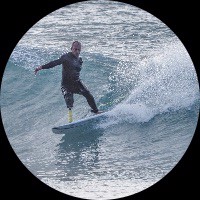 I love my sport and I invented a foot for water sports, I wish I could patent it

Surfing the Padang Padang is like surfing no other wave.  Sure, it's one of the best lefts on the planet, an epic wave that can be barrel heaven when conditions align. It's tucked into a peninsula below dramatic cliffs and the barrel intensity increases as water withdraws off the shallow reef. For some, it's perfection. For others, it can be just that coupled with a kiss from rocky depths. Now, imagine surfing that with one leg. My name is Fabrizio Passetti and I am an Italian surfer who grew up on the picturesque coastline of the football boot. Tragically, I lost my leg during a bike accident at just 17-years-old – I am 36 now.

To tell my story I have to start at the age of 13 when I moved to a seaside village on the most beautiful surf spot in Italy. At the time I was playing football, and I had reached a rather high level, I was very interested in doing it.
I was 17. I was working as a cook assistant to become a chef, and I was competing in the surf, but one night, unfortunately, fate and fatigue were my enemies, I fell off my bike and that night my life changed forever. Old Fabrizio died and the new Fabrizio was born. A new difficult path was in store for me.
My thoughts after they amputated me? It was 'how am I going to surf?' I stayed for months and months looking at a white ceiling, and the more I thought about it, the more I was convinced that no one would stop me from getting back in the water. Shortly after, I started to live a semi-normal life, I worked as a chef in various countries and then in Italy. But it was all nothing, I had continuous problems with leg infections, the prostheses were too heavy for my amputation. I have one of the ugliest amputations for those who have a prosthesis below the knee because it is difficult to restore, as well as having little movement of the knee and even less leverage when I put on the prosthesis. Shortly after I opened a restaurant in Italy, I wanted to make sense of my life, and in 2008 my son was born.
My reality was made up of exhausting work for one with my problem, I carried out research after research to find the right prosthesis, plus every year I invested my money to buy so many legs, I wanted to get back in the water and I was obsessed with that thought. All these sacrifices, however, went up in smoke and I saw no results, because those legs were not made to get in the water. I lost all hope and without surfing my life was lost, the only thing that kept me alive was the love of my son.
Coming back to Padang, I first surfed Padang four-years-ago, but due to incompetent people, they made me a wrong prosthesis and I was forced to sell the restaurant. One evening I got out of work and felt sick, went to the hospital, and was told that I had a bone infection. Because of this infection, I had to stay in the hospital for many months and risked being amputated all the way to my groin. I cannot describe or try to make you imagine how that would have changed my life. But it was also my true leap. Leaving the hospital I bought a wetsuit and went back to training in the winter, sea swimming and continuing the antibiotics, the infection was eradicated, it was a miracle. I healed from a physical point of view but then I was part of the constant problem that no company wanted to take the risk of getting me a new leg. I could not invent anything because you have to understand that I have no insurance and with a pension that gives me just 200 euros a month.
I went to the hospital to ask to amputate my knee so that I could resume work and take care of my son. But the answer was negative. They could not take the moral responsibility of amputating more of my leg. But what could I do? Without work, without a prosthesis, without my surf. In desperation, I began to repair old pieces of the prosthesis and built a reserve leg. I booked a plane ticket and left for Bali! If I had to lose my knee to get back to work at least I would have lost it surfing. The first place I tried surfing was Padang Padang, tying the prosthesis to my leg with an adhesive tape. I made my first wipeout and my leg flew off. I didn't give up and every day, I continued adjusting it until I managed to stand up and to cut the wall of the wave. After two months now the prosthesis made with components, not made for the sea, was usable for surfing.
After a couple of months, I met a Kuta child who was about to lose a leg due to an accident and I did some crowdfunding. I took care of him by helping him with the little money I had left and I paid his medical bills, it was the best thing I had done in my life! Now that child not only has both legs but is also surfing. Someone on social media saw the story and there was a media boom. And it was right there that I started bringing adaptive surfing to Italy, the following year there were the first adaptive championships in California where I participated. It's only the beginning.

So what's next?
I need funds and supporters. To have investors who can allow me to study and perfect my foot. In addition to Itop, which supports me, I am continuing my research which, thanks to these months in Indonesia, led me to want to correct some things for stability and flexibility. My goal? I want to be able to do the maneuvers I did before my accident, maybe do amazing airs.. why not? I'm a surfer like the others, I don't want to be limited because of my disability. I am an athlete first of all. And I want to be able to finish my foot. And I want to build feet for people like me. It's funny, went to Padang four-years-ago, lost my leg and the other day, after four years, I was in Padang inside my first tube. Life is amazing sometimes.

My name is Fabrizio Passetti and I am an Italian surfer who grew up on the picturesque coastline of the football boot. Tragically, I lost my leg during a bike accident at just 17-years-old – I am 36 now.