No Legs No Limits 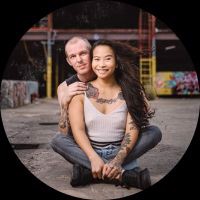 This is a woman who embraces every challenge thrown her way and knows how to stay in front. And if you haven’t heard of Kanya Sesser, you’re about to, although you’ve probably already spotted her in your favorite shows, sports or ad campaign. Endurance is a word Kanya embodies with a smile. Her energy captivates you the moment you meet her.
This same energy and talent have drawn the more recent attention of the CBS show “Hawaii Five-0,” which has her in an entirely new type of role. “When I was playing Rosey Valera,” Kanya reflects, “she and I are different—she lost her legs. I never ‘lost’ my legs, and I get that . . . you need to be like, ‘Alright, gotta be in character, how would I feel if I lost my legs in a war accident?’ . . . I’ve never been to war, I don’t know what that’s like, that’s for sure.” It was easily her toughest role to date but a chance she couldn’t miss. Most impressively (but not unsurprisingly), Kanya landed this part with almost no formal acting experience—and killed it. To say the least she was honored to have been called for the role and just as much for the opportunity to surf in Hawaii! Her first major acting gig was on another CBS network program, “Code Black,” which was nothing like her role in “Five-0.” As Kanya recalls, “I didn’t have to say anything. I just [lay] there like I was dying and lost my legs because someone ran me over at the Whole Foods Market . . . I was in that hospital bed for hours! playing the part.” Kanya didn’t come to the U.S. until she was five years old. She was discovered On the side of the road in Pak Chong, Thailand. Until someone took her to the hospital in Pak Chong and the nurses there took care of her until she was taken to a foster home and then eventually gotten adopted by an American family in Portland Oregon which is her family, mother Jane and father David Sesser and they have two biological kids of their own. Beyond the support of her family, Kanya was embraced by the Portland community. “I put myself in a way where I got noticed by people,” she remembers. “I had opportunities.” Oregon Adaptive Sports facilitated some of her most fruitful connections as a young athlete, not to mention a brand new world of extreme sports, equipment, and techniques. Despite seemingly insurmountable odds, Kanya has achieved everything she’s set out to do, and she might be the most motivated person I've had the pleasure of knowing. If nothing else, there’s a lot to learn from her motto alone: “No legs, no limits.” ​

If you haven’t heard of Kanya Sesser, you’re about to, although you’ve probably already spotted her in your favorite shows, sports or ad campaign. Endurance is a word Kanya embodies with a smile. Her energy captivates you the moment you meet her.