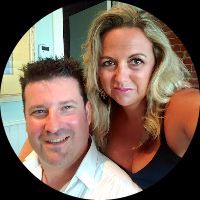 My husband Brian had an accident in Nov 2017 falling off our roof whilst putting up the Christmas lights. He suffered a spinal cord injury level T12 and is paralyzed from the waist down. At the time our children were age 6 and just 11 months. My son had his 1st birthday and took his first steps in the hospital. Brian was in the hospital at the Hamilton General rehabilitation center in Ontario for almost 4 months. He then took part in daily physio with the outpatients' program for another 8 months.
During this time there were many complications, such as pressure sores, bowel and bladder issues, etc. It was not easy for him or any of us, but we got through as a family with much love and support from family, friends, and our community. Brian's constant drive to get through this and show his kids he could do anything was what got us all through. He always had a smile on his face (well not always for me behind closed doors as I am the only one that sees the real struggles, but that's ok that's what us wives are for!!!) But anyone that meets him says his positivity and sense of humor are so inspiring.

Brian was really into golf before his accident and one of the first things he said after recovering from his surgery was that he was sad he wouldn't be able to play golf again. This all changed after a few months of rehab and physio he was determined to get back out on the green again. His accident was in Nov 2017 and by May 2018 he was out on a Solo-Rider with a golf pro at Flamborough Hills Golf Course learning a new way of playing as a paraplegic. He enjoyed this so much and wanted to raise awareness for anyone with mobility issues wanting to play golf.
So together with the help of some close friends we put together a charity golf tournament for May 2019 which we named Rolling Thunder (Brians's nickname from me once he got his wheels). It was a very successful event in which we raised close to $20'000 for Spinal Cord Injury Ontario. We planned to make this an annual event but haven't been able to since due to the pandemic. Watch this space though as we are hoping to continue in 2022.

Together we have also run/wheeled 5k races to raise money for SCIO as well as for the Hamilton General Hospital. Our goal was to push for 10k this year but unfortunately, Brian recently broke his arm falling out of his chair and is still healing.
We have also taken part in a "Rolling through Barriers" campaign for SCIO and are big advocates for making Ontario more accessible. We recently campaigned for a wheelchair Mobi matt installed on our local beach which has encouraged other beaches close by to do the same and this has been extremely successful.
Brian is now on the South Western Ontario Professionals Executive Community for Spinal Cord Injury Ontario He looks after Hamilton / Niagara regions for fundraising events. Our next goal is to become Peer support partners for SCIO and give comfort, support, and advice to any families going through similar experiences to what we have. Helping others has helped us and we continue to teach our children the same compassion and empathy!!