yoocan - Riley Grace - Life is better with you

Life is better with you 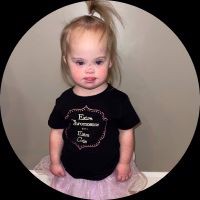 Riley’s story starts April 23, 2019. We had opted to get the 3 month scan and NIPT test with our 3rd pregnancy just for the extra ultrasound. The tech brought in the Maternal Fetal Medicine Doctor and he pointed out that there was an increased nuchal translucency measurement and that it was common with different trisomies, he suggested we have the materNit21 test to see which specific trisomy we were at high risk’ for. We opted for it. I got the call a few days later that the baby was at high ‘risk’ for trisomy 21, otherwise known as Down Syndrome. I'm not going to lie, it took my breath away. I cried for what I thought I was losing and I cried because of the way the news was delivered from the genetic counselor. She delivered the news as if it was a terribly awful condition. Then of course I had to go back to Maternal Fetal Medicine where the specialist suggested I get an amnio or a CVS in case I would like to know 100% if I had plans to terminate. That was obviously not an option for us. We said we will have this baby no matter what, it hurt me that they would even suggest otherwise. I just couldn’t fathom their reasoning.. why? I have a teenage nephew with Down syndrome. What if my sister in law aborted him? HOW was he not worthy of life? HOW is my baby not worthy of life? The rest of my pregnancy was very stressful, to say the least. I had terrible morning sickness, high blood pressure and a high risk pregnancy. I had 2 fetal echocardiograms which were inconclusive. Fast forward to October 10, 2019 (my 35th Birthday) I had an Ultrasound that day. The OB told me I had an umbilical vein varix and that I had to be induced ASAP because I was at risk for stillbirth. October 11, 2019 at 12:15 am, Miss Riley came into this world!! She was just perfect. She cried right away but then her color started to become gray, so they took her and gave her oxygen. We had a week stay in the NICU and also a diagnosis of an AVSD heart defect that would need surgery. They told me also that Riley had a few traits of Trisomy 21, I told them I was aware there was a high chance of that early in my pregnancy and that it didn’t matter, she was the most perfect baby in the world. February 2020, Riley’s heart got the repair it needed, it had been a bumpy road but since then we are starting to really see the real Riley. She is a force to be reckoned with. I truly believe the world will know her name. Down Syndrome, heart disease and being born a month early has NOT held Riley back, she is meeting her milestones and wants to be a big kid like her big brother and big sister! It is truly amazing to see how strong Riley is, despite her low muscle tone she is rocking PT, doing baby signs and getting into everything like any toddler should! I do know we will have some challenges ahead, but I also do know that Riley is a rockstar and she will overcome them all! Down Syndrome isn’t something to be feared, it is something to be celebrated! Riley has opened up a whole new world for our family! Riley’s smile can warm even the coldest heart, her determination is nothing short of extraordinary. Her extra chromosome makes her who she is! She IS Riley, she HAS Down Syndrome.