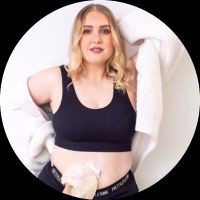 Hi everyone! My name is Lauren and I have been diagnosed with Crohn's disease for 4 years now. I had a flare-up in June 2021 that they tried to treat with steroids, but 8 weeks later I was still reacting poorly and not responding to the treatment. In October 2021 it got so bad I was admitted to the hospital. I was sleeping 20 hours a day, could barely move, and hadn’t been to the toilet in 6 days. I was in pain and I felt so weak! They tried treating me in the hospital with IV steroids but I continued to deteriorate. After some scans they found that I had numerous internal fistulas in my intestines (tunnels between my organs), a blockage of around 6kg of waste, and part of my bowel was so inflamed that it had shut down completely and had collapsed. My intestine had given up and the walls has stuck together. Waste was being pushed through my fistulas and I was on the verge of perforating. My situation was life-threatening.

I was told that I needed life-saving surgery and that within 24 hours I would wake up with a stoma. I couldn’t believe it. I’m only 25 and I felt like my body was giving up on me. Due to covid, I wasn’t allowed any visitors, so I was facing this all alone from my hospital bed. As promised, 24 hours later I was in surgery and they removed half a meter of my intestines, drained the fistulas, and gave me an ileostomy (this is a type of stoma). Recovery was hard. I was in immense pain but I also had to learn how to use my stoma and care for myself again at age 25. The stoma nurses were amazing but it was still the hardest thing I have ever faced.

In the hospital, I thought a lot about my life and how close I had come to death. I decided that I would do my best to embrace my stoma and the second chance that it gave me. I decided to make an Instagram account @lauren_talking_shite to document my journey in a really honest way, get support from others and give support to others in similar situations. I wanted to prove to myself and others how strong I could be. The account began to gain traction and I decided to do a photoshoot showing off my stoma. I feel good and confident and brave and I wanted to share body positivity with the world, despite not looking how the world wants me to look! I now do photoshoots regularly and advocate for disabled bodies to be present in popular media. I also support others with their IBD and stomas and I educate people on the impact of Crohn's disease and stomas. I’m so proud of the woman I am becoming and feel that something that should have broken me has actually been the making of me!