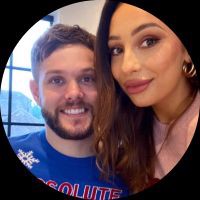 11 years ago, at the age of 17, my boyfriend George was in a car accident and sustained a spinal cord injury. He is now paralyzed from the chest down and requires the use of a wheelchair now. At the time George was a regular teen, going to college and playing a lot of football, which he was very good at and was on the path to hopefully playing at a high level. After his injury, a lot had to change. In the beginning, he worried about what he would do with his life. Football had always been his passion and he wasn’t about to let his spinal cord injury stop him from having it in his life. So he eventually brought his local football club (for which he used to play for). He is now the owner of Worthing FC and the club is doing so well. I’m so proud of him! Having a spinal cord injury doesn’t have to stop you from having or doing the things you love. You just have to find other ways to work around it. Anything is possible!

Over 2 and half years ago I met George through Facebook. He messaged me and was so charming and confident. I was already physically attracted as he is very handsome, but his openness and honesty are what won me over, I instantly knew he was trustworthy. Things are different for me now that I am dating someone with a disability. Every relationship has its challenges but our challenges come from the outside world where things aren’t made to be accessible, that’s where things get difficult and it’s a real shame because our own relationship together is perfect. I am now a full-time PA/carer to George and it is the best ‘job’ ever!

We decided to start a joint Instagram account called Thewheellife_ and also a YouTube channel so that we could show others that being in an integrated relationship works. We started this in order to give help and advice where we can to others in a similar situation and to also learn things for ourselves too! We love sharing what we get up to and going out to different places and letting people know what is and isn’t accessible. We just want to raise more awareness about disability and accessibility so that it can get better and better as time goes on. The support we’ve received and the people we’ve met since starting the page have been incredible!