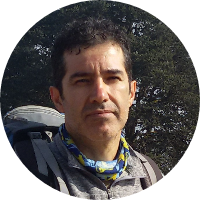 I am Mohsen Pourghasem, a Para-climber. I'm 49 years old. I lost my four left hand fingers when I was only 13 years old. I started sport and rock climbing three and half years ago I was the firist Para-climber to ascent in Alam Kuh in August 2015. Alam Kuh (Alam Kooh) is the second highest peak in Iran with elevation of 4,848 meters. The 800 (4050m to 4850m) m high, steep granite north face provides some of the most difficult and interesting mountain routes in the country and the climbs rank alongside major climbing routes in the European Alps. In addition to local climbers, the north face attracts European climbing teams. The climbing of Alam Kuh via all north routes are class five high altitude technical climbs which need hard struggling with rock, ice and rock falls. A team of two members, Harry Rost (German) and Amir Alai (Iranian), climbed it first in 1964. French and Polish teams established three more routes until the Islamic revolution in 1978. After my two and a half year experience of rock climbing I would like to reach my dream that was to ascend in Alam Kuh wall. However most of my activity was in sport climbing for world para-climbing championship events. But, I love rock climbing in nature and I have some limited experience in Iran rock walls such as Bisoton Wall and Pol-e-khab routs. My young friend who helped me in this ascent was Farshad Mijoji. His age is the same as my son. Yes we are from two generations. Farshad is a professional big wall climber. He has some experience in Trango wall and Tsaranoro. We began moving into Alam Kuh area on August 24th, 2015. We had planned to drive to Vandarbon camp and start our trekking climbing the next day. We separated the main technical means to carry by mule and began climbing toward Alamchal on the morning of August 25th. Since the climbing season had ended, the Alamchal area was quiet. This quiet condition was a very well situation in Alam Kuh routs. We had decided to climb Harry Rost route. Our other two friends (Bahram and Mohammad) were supposed to follow us to take some pictures and films during my ascent on the wall, because my ascent was the first para-climber ascent in Alam Kuh wall, and even first record in the world. We woke up at 3:30 a.m. on August 26th and left our tents at 4:30 in the morning. We had to pass through the glacier and rocks of Alamchal area and after crossing the hazardous area (where stones would fall) got to the starting point of the wall and arrived at the route at 6:30 a.m. Bahram and Mohammad started climbing and we followed them at 7:15 a.m. The sunlight helped our climbing and made us warm. Frashad was the first climber in the first pitch and I was the first climber in the second pitch. After a few pitches we preferred to pass the camera team, because their climbing was so slow and Mohammad couldn’t climb with enough speed. We had to reach to the top of the route latest by afternoon and our ascent plan was for one day. We had to climb 11 pitches before the Falling area near the top of the peak and pass 3 pitches in the Falling area. So, we went past the camera team before the French two-way. Now, we were climbing better and smoothly. After the French two-way a stone suddenly dropped near us like a shooting from a gun. Some parts of the Horry Rost route passes from slots, therefore, the route is in the shadows. So, the holds are covered by ice. This situation depends on the weather. We had a hard situation in those parts, because one weeks ago Alam Kuh had a snowy weather. Horry Rost route has 5.10 B – 5.11 C and this route grade can be increased according to ice and weather situation. We climbed 9 pitches without resting because we were worried about our time. After the 9th pitch we took some minutes to rest when we were sure that our time is enough well and we could finish the rout in afternoon. We continued our climb and finished main part of Harry Rost route at 16:30 p.m. (end of 11th pitches). We were so excited and of course I was more excited because this was my first ascent. Farshad had climbed this route 4 times and this was his fifth ascent. He believed this ascent was harder than his previous ones because of cold weather, ice and situation of the holds. Now, we had to pass three pitches in the Falling area. The Falling area was so slippery. You have to be patient to pass this part, especially after climbing exhaustion. Finally, we passed the Falling area and reached to the peak at 6:00 p.m. I shouted joyfully and was so excited at the summit. Yes, first para-climber…me… Mohsen Pourghasem could ascent to Alam Kuh north face wall.