WALKING INTO THE LIGHT 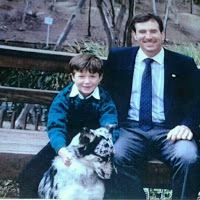 His pain felt too great, a thick, dark cloud he could not escape

Thirteen years ago, Devin Eshelman stood on the balcony of a three-story building, ready to end his life. His pain felt too great, a thick, dark cloud he could not escape. He did not really want to die, but he wanted the pain to end. And jumping seemed the quickest way out. Little did he know, God was about to rewrite his story in the most miraculous way. Devin was born and raised in San Diego, the son of divorced parents who offered him an idyllic childhood. During his junior and senior year of high school, Devin served as captain of his volleyball team. He went on to the local Junior Olympic volleyball team, participating in tournaments all over the country. “Life was easy and great,” he said. “There was nothing to complain about, but there were no real challenges either.” After graduating in the top 40 of his high school class, Devin began exploring college options. He selected UC Berkeley because he wanted to be challenged and desired a change of scenery. However, after arriving at the school, Devin struggled with loneliness. “I didn’t have the same support group I had growing up,” he said. “I didn’t have people to surround me if I failed or succeeded.” He developed poor study habits and pulled many all-nighters, stumbling to class exhausted most mornings. Depression sank in. To comfort himself, he began smoking marijuana. But the habit only exacerbated his loneliness. He eventually stopped going to class and dropped out of school.

Devin’s depression spiraled from there

Devin returned to San Diego, hoping to resume life as normal. But life only grew more complicated. His behavior became erratic, and his parents took him to a doctor, who diagnosed him with bipolar disorder. He began taking medication, hoping to get his mood back on track. But the meds did little to ease his pain. Devin struggled with the stigma of mental illness, ashamed that he’d been slapped with a diagnosis. “I could not accept that I was one of those people,” he confessed. Devin’s depression spiraled from there. He continued self medicating with marijuana, and his parents, concerned he had a drug problem, did not want him living at home. He moved in with a friend, and the vicious cycle continued. His father recommended a recovery home, where Devin went for a time. There, he learned marijuana was not his friend, but was in fact contributing to the troubles in his life. He wrote a letter to marijuana, in which he told the drug, “You are bad for me.” He hoped breaking up with pot would jump start his life on the right track, but the depression only deepened. He grew suicidal, convinced he was the worst person in the entire recovery home. Wanting a fresh start, Devin decided to relocate to Los Angeles. But his depression followed him there, haunting him further. He experienced extreme highs and lows, blowing money at the mall during his manic state and sinking into a suicidal state after he crashed. Doctors then diagnosed him with Schizoaffective disorder, a type of schizophrenic bipolar disorder. Desperate for help, he went to Alcoholics Anonymous and Marijuana Anonymous. There, he found folks who’d hit rock bottom, many who’d fallen into the hard core drug scene in Hollywood. But he didn’t find the hope he’d been looking for, and he left feeling lonelier than ever. The suicidal thoughts returned, and Devin checked into a mental hospital. One day, when it all seemed too much, he decided to end his life. He climbed onto the balcony of the three-story building and decided to jump. This is it, he told himself as his feet neared the edge and he prepared to take the fatal plunge. I’m ready to end the pain once and for all.

But things did not go as planned. Devin awoke several days later from a morphine-induced coma and found himself in a rehab hospital in San Diego. He was alive – and lucky to be alive, according to doctors. After his fall, he’d been transported to the UCLA intensive care unit, where doctors performed an emergency operation on his severed spinal cord. A titanium rod now ran through his back. In addition, he was now paralyzed and would not walk again. As Devin lay in the hospital room recovering, another patient turned to him and said, “Hey, would you like to meet my brother- in- law? I think you’d be interested in his story.” Devin agreed to meet him. The man showed up and shared his incredible story with Devin, telling how he’d been a member of a drug cartel at one point in his life. Immediately, Devin was struck by the man’s presence. His eyes bore a sort of clarity Devin had never seen before. He knew something was different about his man. “So what happened to you?” Devin asked. The man smiled and uttered just one word. “Jesus.” Before he left, the man handed Devin a book. Devin poured over the book that night, intrigued. In it, he learned about Jesus, the one the man spoke of. He read of a God who sent his beloved son to earth to die for the sins of mankind. The words struck Devin deeply. “God, if you are real, I am gonna give this a try,” he prayed. “I have nothing else.”

Devin surrendered his life to God

Sitting there along in that hospital room, knowing he would never walk again, Devin surrendered his life to God. He confessed that he was a sinner, then proclaimed that Jesus was Lord. He then spent the rest of the night talking to God about everything he’d done in his life. He knew right then and there that he had been forgiven and would never be the same. The next morning, when Devin awoke, he felt like he was 12 years old again. Even as he lowered himself into his wheelchair, unable to feel anything below his waist, an inexplicable joy radiated through him. After feeling like a monster for so long, lost in the darkness, he now felt complete vitality. He rejoiced, knowing he had walked out of that darkness and into the light. He was now in the presence of God. For the rest of the day, Devin prayed and read his Bible. He remembered the man’s clear, peaceful eyes, and then he fully understood – the man had found true life. And now, so had he. Devin would never be alone again. Back home at his parents’ house, Devin adjusted to life in a wheelchair. His family constructed a ramp in the backyard, and everyone sacrificed to help him get around. But instead of focusing on his disability, Devin focused on Jesus. He knew the encounter he’d experienced in that hospital room had been real. God had saved him. He had a purpose for his life and wanted to use him mightily.

Devin returned to school and obtained a psychology degree. He began volunteering with NAMI, the nation’s largest grassroots mental health education, advocacy and support organization. Eventually, the organization offered him a job. He began advocating for others, speaking to high schoolers about suicide prevention and drug addiction. He then went on to teach classes and facilitate support groups. His powerful story resonated with many. For fun, Devin began playing wheelchair tennis. There, he met a girl named Theresia, who’d had polio since she was born. The two bonded over their similar struggles and began dating. Teresia invited him to the Saddleback Church 35 year anniversary at Angels Stadium. Devin was blown away by the volunteers, the worship, and the enthusiasm of the pastors. More than anything, he was impressed by the impact Saddleback seemed to be making all over the world. “I stood there taking it all in and said to myself, ‘All right. I’m in. What do I have to do?’” Devin said. He and Teresia began attending Saddleback together at the San Clemente campus. They then formed their first small group with two of Teresia’s friends. Devin found himself falling in love with Saddleback Church, and also with Teresia. After a casual dinner one night, he proposed to her, and she happily accepted...now they are married!

He is playing wheelchair tennis and more...

Today, Devin remains an active advocate for mental illness and loves telling his story to encourage others. He has spoken to thousands, sharing his powerful story at various schools, mental health clinics, seminars and churches.

After winning a big tennis tournament in Florida in 2011, he hopes to win another one in 2017. Never deterred by his physical challenges, he also enjoys playing wheelchair basketball, surfing and coaching tennis. He and Teresia love being leaders for the new Saddleback campus in San Diego

He does not focus on his handicap or bipolar diagnosis but instead keeps his eyes steady on his creator, the one who gives him purpose each day. He knows that even under the most difficult circumstances, including a terrible tragedy or an unbearable diagnosis, there is hope, purpose and healing in Jesus Christ alone.

Dream Shot: The Journey to a Wheelchair Basketball National Championship

I'm in a wheelchair, and think Tennis is just as good as it used to be!

Dream Shot: The Journey to a Wheelchair Basketball National Championship