From Walking to Wheeling

My life has truly been a story of Ups and Downs, it all start when I was in 6th grade on Mothers Day. I went to the park to play and I was jumping out of the swing when I fell, knocked myself out and had 2 broken arms. I couldn't do anything on my own, you know its bad when your mom has to attend 6 grade with you.


I was relativity healthy after that, I traveled all over the world and was full of energy. While in Germany, I started to get dizzy, frequent headaches, and was having seizures. In 2005 in a German hospital I was diagnosed with a Brain Tumor on my frontal lobe. I was flown medical evacuation to Walter Reed hospital, in DC.  When there they agreed that I would need brain surgery and asking me where home was, I came back to Kentucky. During this time my husband at the time, was dating a 17 year old girl and he didn’t want to come to Kentucky with me.


Aug. 2006 I had brain surgery and started treatments. Sep. 2006 my divorce was final, as my ex-husband said in court “He doesn’t want a sick wife” the judge asked him if he remembered his vows in sickness and in health.  Anyway, it was good he was gone from my life. After everything was complete I was able to return to work, this time as a deputy in Louisville, Kentucky.


After 4 years of follow up, the tumor had returned Aug. 2010 it was back to the same size as it was when it was removed the first time. This is where the problem came in, because of the scare tissue was so thick they said it might not be safe to do the surgery again since it didn’t heal right the first time. The surgery was very extreme; they cut me under my top lip pull the skin over my nose and removing my sinus cavities to get to my brain through my face. I have sever nose bleeds every time I blew my nose. Since the tumor is back, I have dizziness at times and seizures but they are currently under control with medication.


I still did everything as before, I know one day when the tumor getting bigger, I might lose my vision and medications might not control all of my symptoms. But this isn’t the end of my story. I had to come to terms with this thought that things might really change me. It was followed by lots of tears and talking to my family about future plans for my life.  Little did we know what was coming next.


I went on just doing everyday activities; I completed my Bachelors in Public Safety then my Masters in Dispute Resolution. I didn’t think about anything going wrong, I was tough. I did mixed martial arts, played OpFor on Ft. Knox, worked, and didn’t let anything stand in my way.


Sep 17 was when all hell broke loose in my life. I had gotten hurt working and I thought I had a pinched nerve, but after a couple weeks of no improvement I went to UL hospital.   I walked in told them that my back hurt, they put me in a neck brace and I kept getting a little annoyed explaining that I walked in and didn’t need a neck brace.


They sent me to CT, when the doctor came back instead of standing and talking with me he sat down.  I knew right then something wasn’t right. My spine was broke at T4, T5, and T10. And I was going to have to have surgery to remove the broken vertebra.   My family and I, wore told by the Attending Neuro Surgeon that, he would remove the broken parts and that I should be able to return to normal.


Estimating that the surgery would only be an hour long, in actuality it took 7 hours. My mom never got an update about my condition so she knew something was wrong. After the surgery my family learned of the complication or accident I should say. When the surgeon explained that he had cut to deep when removing the bone around T4 and sliced into my spinal cord.


When they got me to my room, I was singing (thanks to the medication). I was using my right hand to snap but my other arm just laid there. My mom trying to understand what just happened she started pinching my legs and my left arm, but I didn’t even notice. The nursing staff and doctor kept coming in and pinching my legs and feet. I never even moved, I had no idea what was going on. They asked me to touch my own legs and tell them what it felt like. I kept saying “plastic, it feels like plastic”.


They tried to get me up out of the bed after several days but it was such a shock to my system just sitting up sent me into a bad seizure.


I was eventually sent to Frazier Spinal Cord Rehab, they are part of the Christopher Dana Reeves foundation and were making great progress for those with spinal cord injuries. They taught me how to do everything again.  I learned how to get dressed, the proper way to use a wheelchair, how to cath and go to the bathroom, and how to transfer myself out of my chair onto things like a couch and shower chair.


I went home after a couple of months: the doctors wanted to put me in a nursing home, my mom wanted me to come live with her, but I wanted to go back to my home. So I stubborn and went home, mostly alone every day.  About a week from being home I was sitting on the couch watching TV and the wheelchair was always next to me, I could see it in my line of sight.  I got tired of seeing in and I launched it across the room. I sat there a few hours later, feeling hungry, knowing I had to pee. But no wheelchair. I had to slide off the couch onto the floor, crawl and drag myself to the wheelchair, I then had to sit it upright and climb back in it.  I have never been so humbled in my life, I knew that my wheelchair was going to be a part of me and that it’s not holding me back but helping me.


I got good at using my wheelchair over time with a few accidents along the way. (like flipping my chair backwards my legs went over my head and I kick my Aunt Revia in the forehead just before church. She had a good sized knot that was red, blue, and purple) oops, I can’t control where my legs were going.


I do so much now. I was Ms. Wheelchair Kentucky 2016, I have gone to every elementary school in Hardin county talking about overcoming and disabilities, I was a commencement speaker at the Galen Nursing Graduation, and the list goes on.


This year, May 2016. I thought I was having an asthma attack because I couldn’t breathe but the inhaler did nothing. I kept trying even doing a nebulizer treatment. Jerry snatched me up as he watched my lips turning blue and drove me to Hardin Memorial Hospital, running lights and trying to care for me.  When we got there I was taken straight back into an ER room where they put me on oxygen and started running tests.  I am glad that they didn’t just treat me for an asthma attack because the blood work showed something astounding: my red count was extremely low, my white count extremely high, and my platelets through the roof.


It’s wasn’t an asthma attack there was no red cells carrying oxygen to my body.  I started going in and out of conscience, as the hospital ran test to see if I was bleeding out internally because with such a dramatic loss of blood that was what they thought was happening. I was told by the ER doctor that he had seen gunshot victims with more blood than I had.


They tested everything: CT scan of my full body, xrays, stool test, and a so many I can’t even remember. I was out of conscience before my mother arrived from Lexington and they doctors had already started blood back into me. (8 packs in total)


They never found the source of the bleeding so they called in a Hematologist, which led to more tests, including a bone marrow test. They found out that I have Essential Thrombocythemia which is a stage in Acute Leukemia.


As a recap of my ups and downs: world travel, brain tumor, deputy, brain tumor returned, mixed martial arts and finishing school, spinal cord injury, becoming Ms. Wheelchair Kentucky, lost all my red cells and got told about the thrombocythemia.


Now, I am at home more with all of my pets and I am sharing my story with anyone that will listen. The world doesn’t have to be over in hard times, you just have to get more creative. If you can’t stand up, stand out. 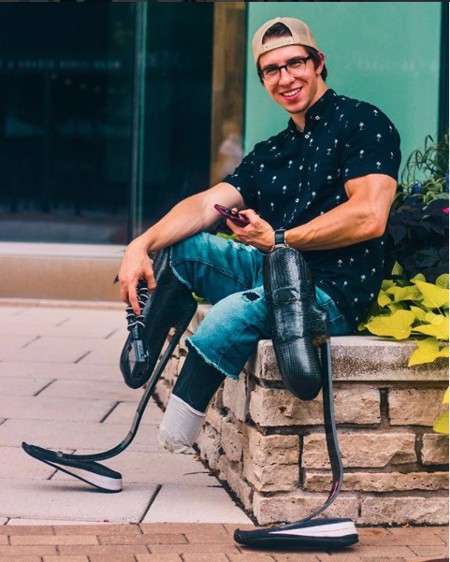 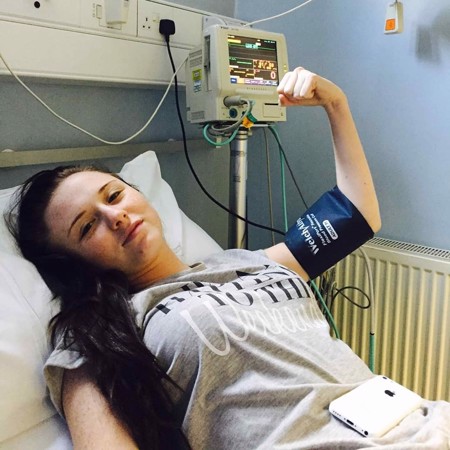