yoocan - Ashley Spicer - What Spina Bifida has taught me: Always have a positive attitude!

What Spina Bifida has taught me: Always have a positive attitude! 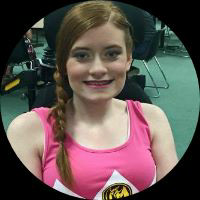 Hi, my name is Ashley Spicer and I was born with Spina Bifida. My whole life has basically consisted around surgeries or just staying at a hospital for large periods of time. Since I was born, there were many many many times where the doctors didn't think I would make it from a surgery but look at where I am now. Growing up, I was raised to do as much as I can on my own and that's exactly what I did. My parents would put all my favorite juices at the very bottom of the fridge and I would crawl in there whenever I wanted one. Some people thought the idea was crazy and that they should just get it for me instead of having me do it on my own but I didn't see it that way. I loved being able to do some things on my own, even if they were small tasks. Whenever my mom would tell me stories about myself no matter if I was little or just a couple months ago, my catch phrase would always be the same to everyone "I can do it." I guess I have always had that positive attitude and outlook on life. When I was younger I use to always think the sky's the limit and that I could do or be anything I wanted to. I remember changing my mind so many times on career choices and what I wanted to do, only to find out a couple months before graduting I wanted to try something different. Little did I know it was going to change my life forever.

Orginally I was going to graduate high school,  go to college and do things everyone else was doing. I was offered the opportunity to go to Project SEARCH for a year after graduation. Project SEARCH is a transition from high school into the working field. Since this program is for people with disabilities, you have to be on a IEP in order to be accepted. At first I was skeptical about it because I only heard about it being at Mercy hospital and lets be real, I have been in and out of hopitals all my life, I wasn't about to go work in one. I went for an evaluation there anyways and a few weeks after that I heard about another one at LCCC (Lorain County Community College).  I was beyond happy and excited when I heard that. I figured I would give it a go and see how everything would work out. It was an unpaid internship and since I had to hold back my diploma, I could still use the bus like I was when I was in school, I was just going to a different place. There were three rotations for the year and you learned all different types of skills and even more life skills in our classroom time. The overall goal with the program is to get you a job and have the skills to go above and beyond, some things we learned most people probably wouldn't even think about doing, that's how awesome and amazing this program really is. While I was going through this program, I quickly realized that if it wasn't for all these amazing job coaches and everyone else on the team helping me, I would never be able to successfully get a job. It took 9 months to get my first job. Due to medical reasons, I could only work part time which for  me was only 6 hours a week. As the weeks and months carried on, I got very tired after my 3 hour long shifts and just wanted to go straight to bed. Long story short, I pushed through all of it even when I was at my worst and always put my best foot forward. The people I worked with treated me exactly like everyone else and it made it so much easier for me to be myself around them. I always maintained a positive attitude & put a smile on my face whenever I came in, that's just who I am as a person.

Eight months later, I got laid off due to not enough work for me to do & getting everything else I used to do transferred to a different location. I am forever grateful for all these people I have met on this journey. Thank you for treating me like you would everyone else. Thank you for giving me a chance. About a month or so before my last days at work, I applied for more jobs. I got one phone interview. I was told I was going to get a call back next week so I waited, and waited, and waited. I didn't get anything so towards the end of that week I emailed and followed up with the person who interviewed me and they told me they already had someone else. Most people don't think that's a big deal, but for me it was. I was doing everything on my own and was excited I at least got a phone interview. That's when it really hit me that I can't do this alone. I could but people don't look at me the same way. I still have a happy upbeat attitude no matter what but people would rather hear from someone in a suit that has everything together rather than someone in a wheelchair, even if we are both saying the exact same thing, such a shame. I know what I'm talking about, I just need more people who are willing to listen to me and give me a chance.

About 3.5-4 years ago, I started my journey with a bone infection. I was at the hospital for a check up, I can't remember if I just wasn't feeling good or why exactly I was there in the first place. Everything at the very start was a blur to me. Anyways, they took my vitals and everything was off. My tempature was sky rocket, my heart rate wasn't right, no one knew what was going on. All I knew at that time was that I didn't feel right at all and I wanted to pass out. The doctors soon found out that I had a pressure sore. At least that's what they said and thought at the time. From then on out I had countless surgeries done and hospital stays. I even had to miss some of high school which set me back a lot. After about 2 years or so they finally figured out I had MRSA but it wasn't contagious so I wouldn't give it to anyone. We were all stunned, how does an infection come up out of nowhere? We didn't know the exact answers but it could be possible that something got into my body with one of my other surgeries and it just broke through over time. It makes sense. Since I was in the hospital for a long time throughout this journey, you can only imagine how bored I was getting. You can only watch so much tv and listen to so much music until it gets very very old. I decided to make cards for other people in the hospital. I knew for sure I didn't want to be there, I can't even imagine what they felt like. My goal was to make other people smile and know that I cared for them. I know it sounds silly but that's just a part of who I am. During those next couple of days, I wrote out a bunch of cards and had the nurses give them out to everyone. I was the talk of the floor but that didn't matter to me. I never wanted the recognition for anything that I did. I just wanted to make people happy, that's my main goal in life.

A couple months after that I went back for another surgery, the same one I've had over and over again. The doctor made a mistake and hit a blood vessel. Usually after the surgeries I would be put back on my wound vac. As soon as I was hooked back up to the wound vac that's when the blood just kept coming and coming. It filled up the container right away and it still kept going. They finally took it off of me but I quickly got dizzy and the last thing I remember saying to the nurse was "I feel really dizzy, is this normal?" I heard her say "what?" and  then I passed out completely. That had to be one of the scariest days of my life. I really thought I was going to die from loosing so much blood. I woke up with IV's in both my hands while getting blood into both of them. I believe I got a total of 4 bags full in me that night.

I don't care what anyone thinks, I truly believe god saved me that night. I am here for a reason and I have a purpose. Life truly is way too short to be angry and hateful. It doesn't matter what you are going through, fill your mind and thoughts with nothing but positivity. Always have a smile on your face and let the world know who you truly are. You will go far in life if you have a positive attitude & look at the brighter side of things. The struggles you face in life will truly make you a stronger person in the end, I promise you.

Hi, my name is Ashley Spicer and I was born with Spina Bifida.