Dutch Ninja Warrior with one Leg! 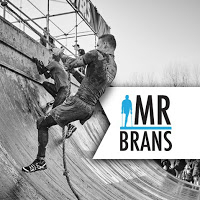 A couple of weeks ago I saw an advertisement on the tv for the Dutch Ninja Warrior Netherlands. I do not follow the program, but I was certainly aware of other athletes with one leg and their participation in the program in America. I was keen to sign up but I had doubts. I spoke to the Dutch OCR Family about Ninja Warrior and their participation. I was envious but I still couldn't find the courage to sign up. On the call they said; "Mike, do you want to join?" . I replied "Can I?"... fear and doubt hit me but it was mixed with excitement. "Yes! Of course you can!"

"Hi Michael Robbert you are speaking with Talpa from the Ninja Warrior show. I'm calling you because we have heard your story from Team Family. Would you like to attempt the Ninja parcours? After more than a half hour spent on the phone, I decided to go for it. However, I  agreed with one condition, I wanted to leave a statement with my participation. 'Let your disabilities not be an obstacle. Dare to step out of your comfort zone'. In the weeks that followed, Talpa created a promotional video that will be broadcast prior to my attempt. I have seen it and it is pretty cool. It's a huge thrill and definitely something to tick off the bucket list. First and foremost though, is my mission to show you that although there may be obstacles, with hard work there are no limits.

The big day arrived and together with friends and family I travelled to the show. I needed to be there at 12:30pm to run through the rules of the show, explore parcour and do several interviews. I was with a friend Frank van Lieshout who also participated in the event. The show began and I was 4th in line. We ran by the audience who shouted encouragement as we passed. It was during this time I began to appreciate the effect my participation was having on the crowd. They were surprised but inspired I think. Their reactions meant a lot to me. I ran past my family who were cheering as loud as the could, it felt great! The first three participants fell at the first obstacle. This was a sobering moment for me as I thought, if they struggled so early on, how would I do any better. I didn't have long to dwell because suddenly it was my turn! My time to show that an adapted athlete could complete in one of the toughest challenges out there. As I walked to the podium those ten steps were EPIC! When the audience realised that I was an amputee they roared their support which motivated me to push myself to the absolute limit. I stood there ... centre stage and what happened next will stay with me for a very long time.

Lets get ready to rumble

When the starter sound rang out, more then 700 people stood to witness my once in a lifetime opportunity. It was difficult to control my emotions as I felt the electricity ripple through the crowd. I had to power through as I had a job to do! I took my first jump and immediately had to brace myself to avoid falling.  I got ready for the next jump, and the next and so on until  I passed the area where the first participant fell. With my wife on the sidelines as 'chief motivator' and the crowd acting as a World Cup soccer audience, their chants encouraged me and I came to the end of Obstacle 1. My knee was bleeding but I failed to notice due to the adrenaline threatening to burst through my veins. Obstacle 2 was a high wall unit where the ability to hang on was crucial. I started to hang, braced myself and pushed to the other side. With an almighty surge of energy I landed on the mat. I had now left participants 1 and 2 behind me which was way beyond what I had expected to achieve. Obstacle 3 was a large red cylinder that rotated. This cylinder was well over 4 meters long. To get to the other side involved running across the top or hanging below. I strongly considered hopping but knew my chances of slipping would be too great. Eventually I chose to hang under the bar which is much more difficult and requires significant upper body strength. I climbed on to the cylinder and almost immediately it turned meaning I was hanging under it. I pushed my leg against the bar and grabbed as hard as I could with my arms around it but realised that it was going to be an impossible task. When I wanted to move my arms the cylinder rolled to the left because of the extra weight on my left due to my leg. Three times I almost touched the ground, but I was nearly there. I couldn’t grip the cylinder any longer and realised that it was over. I was hoping to get further because I knew that the obstacles after the cylinder were much easier but it wasn't to be. My participation was over. I climbed off the mat to talk the host Dennis van der Geest and I explained the reason for my participation. I will look back on this experience as one I will never forget. I want to thank the public for the overwhelming energy during my attempt. Talpa I want to thank you for allowing my participation and I hope that my involvement has inspired others with or without disabilities. I hope that my participation will challenge others with any form of disability to do things that others say it is impossible. Don't let your disability limit you! Thank you for reading:) Lets share and follow me on Facebook, Instagram or Twitter and subscribe to my Youtube Channel! Michael