Adventures of Owning A Body- Life with Chronic Illness 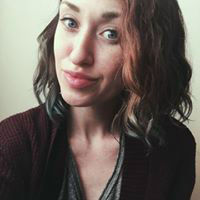 Existing in my body is sometimes the hardest thing I do.

My body and I haven’t had the best of relationships first and foremost. We did just fine until age 12 when things in my family fell apart and I took signs of hips and breasts as personal failure on my body’s part. I immediately resigned myself to the belief that if I could take up less space in the world maybe I could stop feeling so sad and empty. So began a dance of starvation, purging, and self-harm that lasted for years even with much therapy and many inpatient treatment centers.
Despite my weight being the pinacle of my universe, I often felt very removed my body. For years I felt like I watched it from afar as it shrank and grew and shrank and grew again. Anyone who has an eating disorder will tell you that recovery is an ongoing process that never ceases. Your ability to love and nourish your body isn’t always linear and sometimes you find yourself circling back to destructive ways.
In my mid-twenties I found myself starting to cultivate new experiences with my body while still continually struggling with what I looked like. Exercise became a new source of joy for me as my long-hated legs conquered a hilly half-marathon, cycled though 2 hour spin classes, and perhaps my greatest achievement, managed to run a 6:47 mile in 97 degree heat. It seemed that though I still wished to be thinner, sleeker,and leaner, I was beginning to have a sense of what my body was and what it was capable of.

For the first time I found myself finally feeling more centered in what it felt like inside my body.

At age 28 in the fall of 2011, I began a new phase of my life when a simple foot injury from running turned into a chronic pain condition called Complex Regional Pain Syndrome/Reflex Sympathetic Dystrophy (also known at CRPS or RSD). This disease “is a progressive disease of the Autonomic Nervous System, and more specifically, the Sympathetic Nervous System. The pain in the affected area is characterized as constant, extremely intense, and out of proportion to the original injury.”

According to the McGill Pain Scale CRPS ranks higher than childbirth or amputation. The areas affected hurt constantly with a pain incredibly intense like a fire all over my skin coupled with feeling like my leg and feet are being broken from the inside out. It began getting progressively worse in the spring of 2013 and then became very severe in February 2015. After being ONLY in my left foot for 3 years, the CRPS spread up to my knee in May 2015, spread to my right pinky toe and bottom of my right foot in June 2015, and then spread again up to my left thigh in November in 2015. In late 2016 the CRPS spread AGAIN into my ENTIRE left arm, hand and parts of my right arm.  Because CRPS affects circulation to the area affected, my left foot and leg are constantly mottled and often turn either BRIGHT red or purple with swelling large enough that my foot doesn’t fit into most of my shoes. The skin is flaking and shiny. The nails have become very brittle. Both my left foot and leg are a different temperature than my other leg and foot which is typical with CRPS.  My great Aunt also had this so my drs think there is a genetic component for me as to why I developed it.   I now use a wheelchair to get around as putting weight on either foot is incredibly painful due to the nerve pain and nerve damage becoming increasily worse. I have been working to relearn how to walk for over a year and it's been humbling and hard.

In a cruel twist of fate 5 months after developing the CRPS, I became VERY sick with Chronic Lyme Disease  and Bartonella (still not laughing Universe). On March 5, 2012 I got a cortisone injection in my lower back in hopes of helping the nerve pain in my foot as a pain management specialist  thought it may be a issue with a disc in my back (this was before the CRPS was diagnosed). Unfortunately the steroids lowered my immune system enough that a dormant Lyme and Bartonella infection was able to flare up. Oh did it flare up! Within 5 days of the injection I had nerve pain all over my body and had to go to the ER. Several weeks later the nerve pain got worse and was joined by awful joint pain, issues with cognitive functioning, crippling fatigue, and constant nausea. It took several months and MANY doctors in order to get properly diagnosed and treated.

Lyme Disease has left me with a number of issues including mild brain damage, wide spread small fiber nerve damage, and chronic nausea. It's also greatly impacted the CRPS and complicated my treatment plan.

Gone are the days of working the job I adored or running or driving or even leaving the house for weeks on end. This was a new body foreign to me, one that spoke in a sharp tongue of pain and never seemed out of fresh ideas to make me understand that I had absolutely no control of what was going on. After years of starvation and self-harm, I have been stunned by the realization that I could not force my body to stop malfunctioning as it responded to the inflammation going on inside me. My health has had many up and downs similar to my journey with my eating disorder. I have had brief periods of time where I have been able to work part-time, do yoga, or go on a walk with my husband. I have also had periods of time where I cannot wear shoes because of my nerve pain,  have had to go to the ER for pain intervention, and have even needed help getting dressed or bathing myself.

Chronic illness is truly humbling as you find yourself having to adjust your goals to what your body can tolerate. The pain has sometimes made me feel so defeated and angry at my body, a problem I think many struggle with when they are faced with suffering beyond their comprehension and looking for something to blame. While this anger at my body isn’t a new concept , I now understand  how fruitless it is as my body is fighting as hard as it can while under siege. I can finally see that disconnecting from myself even in moments of horrific pain leaves me empty and lost. For a long time I refused to accept that this may be how the rest of my life is. Anyone who is chronically ill always has that hope in their back pocket that they can one day feel “normal”, that remission or a cure is waiting in the wings. I told myself repeatedly that the life I was leading while sick and in pain wasn’t important because it didn’t live up to the standards I had set in my head. Just like with my anorexia, I created strict ideas of what I was supposed to be like and how because I was sick I was a failure. This thinking only exacerbated my grief and I finally had to face the reality that this is how my body is in this moment in time. For the first time in my life I am experiencing true surrender as I accept that I cannot control my body anymore than I can control the stars in the sky.

This body is the only one I will ever have and together we are traversing hard territory that no one prepared us for. I choose to believe that there is a lesson within this experience although I don’t yet know what it is. Maybe it is to continually find my center within my body no matter how my body feels. Maybe it is to have more empathy and compassion for those who also struggle with health issues. Maybe it is to love and accept my body with all it’s external flaws along with it’s angry nervous system and systemic inflammation. Maybe it’s the experience of continually surrendering to the unexplained detours life guides us through and admitting powerlessness in the process. Maybe its accepting that I am disabled and finding beauty in that.

Despite the pain I will continue to search for peace within my body and love it for everything it can achieve even if it is something as simple as putting my feet on the floor.

I am a 33 year old woman who live in central Virginia with my husband and two dogs. I love writing, makeup,coffee, salty carbs, feminism, knitting, yoga, and trashy tv.