Living with a SCI- how my boyfriend changed my life 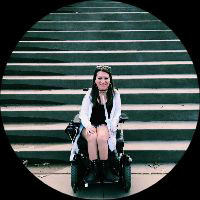 Hey everyone! I'm Alyssa and I have a c1c2 SCI from birth. I was born on November 10th, 1990 and my doctor used forceps on me which caused my injury. He was apparently drinking while it was happening because it was a Saturday and he was a huge NCAA fan. Ever since that day I’ve been on a breathing machine and in a wheelchair. Doctors and nurses would say I wouldn’t be able to do much such as going to the bathroom on my own, breathe on my own, move anything, and so much more. But little did they know that as days went on I moved little by little, practiced breathing on my own when I need to, have a normal bowel movement, and do mostly everything on my own except showering. I recently just learned how to even get myself out of bed. Getting into bed is more difficult anyway. I do my own hair, my own makeup, dress myself, undress myself and so on! I would go to different doctors about different things and they’d be surprised to see someone like me with an SCI able to do so much and be able to breath on my own here and there. I went to school just like any normal person, graduated high school in 09, went to college and pushed myself just like any other.

I am now a distributor for a company called Senegence which is a cosmetic company and I sell their line of lipstick called LipSense and it is AMAZING stuff! I have a Facebook Group people can add themselves to to and check out.    I have an amazing family, great friends and an incredible boyfriend who loves me more than anything. Never in my life would I have thought a guy could love me for who I am and not see my disability, but here we are 4 years later still dating and talking about the future. He takes care of me like no one would. He learned to help me in the shower, change my necktie, learn my breathing machine and wheelchair, and so much more. He has basically changed my life because I really wouldn’t go anywhere without my family because I’d need them. Now, the minivan is ours and we go anywhere and everywhere with each other and in a couple of weeks we are going to California! It’s going to be my first flight ever and my first time to the West Coast! I couldn’t be more excited! I hope everyone enjoys my story and if anyone has a question you’re more than welcome to ask!