yoocan - Caitlin Goerlich - Roll With It and Never Give Up

Roll With It and Never Give Up 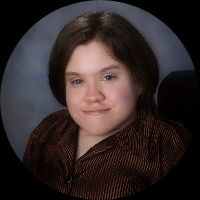 My name is Caitlin and I am 24 years old (born in 1993). I was breeched in my mother's womb and then when I was born - I had a clubbed foot, undeveloped jaw, and a slight cleft palate.  Both my jaw and cleft palate repaired themselves but I needed to have surgery on my foot.

Then when I was one, I was diagnosed with kyphoscoliosis (combination of scoliosis & kyphosis). When I was three years old, I needed to have multiple surgeries (spinal fusions and others) that year and there were complications which led me be paralyzed from the waist down. My official diagnosis is Spinal Cord Injury (kyphoscoliosis, paraplegic, and spinal nerve damage).

Even though I do have a disability and have used a wheelchair since I was about four years old, I have never let it get in the way of the way I have lived my life.

In 1999, I was introduced to the Children's Lightning Wheels Paralympic Sports Club, an adaptive sports team based out of Children's Specialized Hospital in Mountainside, New Jersey.

When I first started with the team, I only did track & field but over the years - I added table tennis and archery to the sports that I compete in (I also did fencing in 2009 & 2010).

Being a part of the team led me to taking part in 12 National Junior Disability Championships [NJDC] (New Jersey, Connecticut, Tampa, St. Louis, Chicago, Michigan, Arizona, Minnesota, and Iowa). NJDC gave me the opportunity of competiting and meeting many other athletes with disabilities.

I aged out of the Juniors division of sports in 2015 and started competing as an adult athlete in 2016 in the field events (shot put, discus, and javelin), table tennis, and archery. I also still help out with the Lightning Wheels whether it's archery or if the athletes have any questions or want advice.

I'm also looking into possibly becoming a coach so I can give even more back to the sports world that has helped shape me into the person I am.

I graduated from Union High School in 2011 and then went on to study English with a focus on Writing at Kean University. I received my Bachelor's Degree in English in 2016.

In 2010, when I was a junior in high school, I was asked to do a talent speech at the Dare to Dream Conference and I did it on adaptive fencing. At the time, I disliked public speaking so much so I wasn't sure how it was going to end up. Speaking at the Dare to Dream Conference was one of the best things that I could've done because I am now no longer afraid to speak in front of people (as there were about 200 students and teachers). I never looked back.

In 2016, I spoke to a group of high school students at the Each One Teach One conference (a smaller version of the D2D Conference) where I talked about accommodations, college, change, and more. I attached the YouTube video for that speech if you would like to watch.

Just recently, in May 2017, I spoke at the Play Unified event held at Union High School (you can search for that video on Facebook under "Caitlin Goerlich - Importantance of Adaptive Sports"). I spoke about my experience growing up in Union, going to school, adaptive sports, and more.

I found myself enjoying speaking in front of people now and glad that I had the opportunity to speak in 2010 because I wouldn't have the confidence I have now if I didn't. I'm looking forward to possibly doing more speeches in the future!

For as long as I remember - I love to write whether it's writing stories (novels and screenplays), blog posts (Wiki-Wheelz), and others.  I want to be an author, as well as helping other unknown authors reach their dreams of authorship.

Being an author is only one of the plans in the my future. I have a list of what I would love and plan to do (staying a little quiet on those until I start making announcements).

My overall goal, in life, is to raise awareness towards disability and to give back to organizations that work with and support people with disabilities because it is VERY important to me be able to give back to those that have helped me and continue helping others.

I am 25 years old. Wheelchair User since I was 4 years old. Athlete - track & field, archery, and table tennis. Aspiring writer.