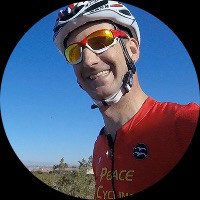 How I got here.

On June 10, 2004 while practicing at a motocross track in Berthoud, CO. for a race that weekend in Sterling, CO. I seat bounced a small rutted tabletop jump, just out of a corner, and was kicked off my bike.  No big worry as this happens from time to time, however this time I landed on my right side and as my neck went over my right arm it broke, causing instant paralysis from that point down.

After utter chaos and finally coming to my senses in the emergency room there was a temporary wishbone halo that had been screwed into the sides of my head to straighten my spine.  From here on out this is where things get foggy and where life starts to flash between reality and a dreamlike state from all the medications.  To this day I still do not know what happened during most of the early weeks of my injury and maybe it’s best that way.

One thing I do remember was talking with my neurosurgeon about my spinal cord injury.  You could tell he wanted to say something but didn’t really know how I would take it.  Mentioning to him to just tell me like it is as your not going to hurt my feelings, he delivered the news that I would be a quadriplegic for the rest of my life and that I would have a 3% chance of walking again or regaining any function below my neck.  Sarcastically remarking I told him I was going to kick his ass when I did walk again!  He just laughed and walked out of the room, not to see him again until surgery a couple days later.

After waking up from surgery there wasn’t much recollection of what happened, however, there are random memories of the various levels of ICU before finally being stable enough to be transferred to Craig Hospital in Denver Colorado, where I would be introduced to my new life.

After spending 3 1/2 months at Craig Hospital learning how to pilot a wheelchair in a non-accessible world, instruct my care, and all other activities of daily living I was finally able to go home.  Pulling into the garage at my parent’s house was really weird, seeing all of my belongings in boxes and a long metal ramp to the front door for me to use.  After everything that happened over the past 4 months, the reality of my injury didn’t really hit me until that moment.

Life at home was difficult and I spent the majority of my time researching what was needed to recover and tried to put positive people around me.  In doing so it took about eight months before standing up on my own and for the next eight years my life would be filled with as much therapy as possible on a daily basis at home, at Project Walk in San Diego, and spending a fair amount of time at SCI Recovery Project in Denver, CO.

The road of recovery has been physically exhausting, mentally draining, and it has taken many years to relearn how to walk even the shortest distance.  I’m beyond grateful to have regained much needed independence, sweat once again, drive without hand controls, and finally reigniting my passion for competition through para-cycling in the upright T1 trike division.

At first I thought my disability was going to take so much away from me but in all actuality my disability has taken me all over the world.

Official diagnosis: C5-6 incomplete quadriplegic Prior to my injury I was a successful motocross racer who was on my way to becoming a professional when during a practice crash on June 10th 2004, I injured my spinal cord at the C-4 level causing paralysis. Not knowing anything about the new world I was about to enter or how that world would change my life in so many positive ways, my long road of recovery began.