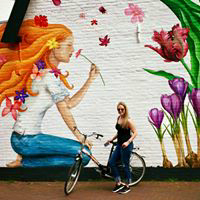 The Beginning of the Pregnancy

We were thrilled to be expecting our second child and the doctor offered early blood testing to check for chromosomal abnormalities and as a bonus we could learn the gender early. We opted to go ahead and do the testing mainly so we could learn the gender. We already had a healthy boy at home so I was crossing my fingers for a girl this time. I can still remember getting the call from the doctor, "It looks like you are having a healthy baby GIRL!" I literally jumped for joy in the kitchen as she told me. I decided to keep the results a secret from my husband and surprised him with the exciting news on Father's Day.

The Second Half of the Pregnancy

All seemed to be going well, and I had no problems leading up to the 20 week anatomy scan. This is the appointment that most people remember as the one when you learn the gender of the baby...we ended up learning a lot more that day. My husband was with me in the room, pushing our son in circles in the stroller trying to keep him happy. I noticed the tech performing the scan was taking longer than normal, and could sense something wasn't right. She said, "I'm going to suggest you be seen by a high risk OB and have another ultrasound". My heart sank, "Why? Whats wrong?" She said "I can't see all of the lip and I can't seem to get a good picture of her heart". My husband and son were still goofing around in the room and clearly not sensing what was going on. I left that day in a daze and for the next week everyone around me tried to assure me that everything was fine and that the doctor probably just wanted to get a second look to be on the safe side. It didn't matter what anyone said, I knew something wasn't right.

The Day It Was Confirmed

An excruciating 8 days later we saw the highrisk OB and had another ultrasound. The tech performing the scan this time didn't take as long and once finshed she said, "All done, I'm going to get the doctor to come speak with you." The doctor walked in the room, sat down next to me, reached for my hand and said, "Your baby has a cleft lip and heart defect. You didn't do anything wrong, this is not your fault". Tears started flowing immediatley and I felt as if I had been hit in the gut. I'm not even sure how I remebered to breathe. She then explained that they would like us to see genetics that day and said they could do an amniocentesis on site if we agreed to it. I signed some consent forms and they lead us down the hall to a room where we were to meet with genetics. The genetist walked in the room and set an oversized binder on the table in front of my now very nervous husband and I. "I just wanted to go over a few of the possible causes for your daughters birth defects." She explained that since our baby had mulitple (midline) defects it was likely they were caused by something more, possibily a syndrome or chromosomal abnormality. Since we already had the early blood testing done and it came back normal I was a bit confused. She explained that sometimes the early testing can be wrong, and that they amniocentesis can check for more things and that is why they suggested we have it done. She flipped through the large binder page, by page, by page. Listing off names of various conditions like Down syndrome, Digeorge syndrome, Trisomy 13, Trisomy 18, etc. Our heads were spinning. Because we were scared, anxious and wanting answers we agreed to the amnio that day. After performing a pretty intense procedure right there in the office they explained that they would call us with the results in a few weeks and that we would also be getting a call from the children's hospital so we could see cardiology soon. We walked out of that building into a different world. The sun on our faces didnt feel the same, the warm air felt suffocating. Our lives had changed forever.

The Rest of the Pregnancy

We soon got a call from the childrens hospital and saw cardiology soon after. They performed the first of many ECHO's on our unborn child and explained that she had a complete atrioventricular heart defect. The defect was repairable, but our baby would likely need open heart surgery within the first six months of her life. After that appointment we transferd all OB care to the children's hospital and planned to deliver in their fetal health center, a small unit dedicated to high risk deliveries. We met with many specialists including cleft/plastics, cardiology, genetics, social workers, neonatologists and more all helping us come up with a plan for our baby and what may happen after delivery. We had almost weekly appointments including ECHO's, ultrasounds, and fetal stress tests. Many of the team members continued to tell us that something more may be discovered after she was born, but we just wouldn't know until then. Our amnio results came back a couple weeks after it was performed and it showed no abnormalities. It was a huge relief, and we continued to hope that these birth defects were isolated and not linked to something larger.

Delivery and the NICU & The Diagnosis: CHARGE syndrome

Jacqueline ("Jackie") Nicole was born by c-section at 37 weeks gestation. She was beautiful. The doctor was immediately able to tell us that she had a complete cleft palate in addition to her cleft lip. I thought, 'ok, maybe that's the only other thing wrong, we can handle that.' After letting us hold her for a few minutes she was sent to the NICU, as planned, so they could keep a close eye on her and perform a complete assessment.

Pretty quickly we noticed she was breathing very fast, and she was unable to breastfeed because of the cleft lip and palate so they put an NG tube in to help supplement her feedings. She would attempt to drink from a special bottle for cleft babies, but struggled with her breathing and wasn't able to get enough. Within a day or two genetics saw her and evaluated her. She ordered a battery of tests and then sat us down and explained that she suspected our daughter had CHARGE syndrome. Having never heard of it my husband and I felt clueless. She handed us a pamphlet and said something like, "dont go look on the internet, you'll just scare yourselves." Of course that is the first thing we wanted to do, and sure enough it was a scary finding. The next few days were maybe the hardest up until this point. One day our daughter had an eye exam, and while waiting for those results she had a hearing test. The audiologist sat us down and said that our daughter was profoundly deaf in one ear (no response to sound) and partially deaf in the other. Our jaws dropped. What? Never in a million years did we think hearing would be affected. After trying to digest that information and move forward we heard from the opthamologist who told us our daughter had large colobomas in the back of both eyes involving the retina and optic nerve. She said our daughter could be completely blind or only partially affected, but only time would tell. Again, shocked. What? How? Why is this happening to our beautiful daughter? I felt angry, scared, worried.

Jackie spent the next few weeks in the NICU and with little progress in her feedings she had a more permanent feeding tube surgically placed at three weeks old. They also discovered she had hip dysplasia on her right hip, which would also need to be surgically repaired at some point. After 6 long weeks, she was discharged home. We left the hospital with a long list of appointments, tentative surgery dates, therapy sessions and well wishes from the staff. We were scared, but hopeful. We had to be strong- what other choice did we have?

After leaving the NICU we settled into our wild new life at home. Most weeks we had multiple appointments with various specialists or therapists. I tried to juggle all of Jackie's needs while also caring for the house and my 22 month old son. Family and friends ralied around us and supported us every step of the way. Jackie had her open heart surgery at eight months old, followed by cleft lip repair at ten months. She then had her hip surgery, which was followed by cleft palate repair. She has also had sedated ECHO's, MRI's and ABR's to check her hearing. She has undergone more anesthesia in her first couple of years than anyone should in 100. Everytime she goes into the hospital we worry about what could happen, we feel completely out of control handing her over to the doctors and nurses and pray they will keep her safe. We are scared, but every single time she has blown us away with her strength. Her recoveries have been rough, but she smiles through it all. We are still busy most weeks with doctors appointments and she has therapy 3x weekly. The past two years have been a whirlwind to say the least and quite an intense ride, but it has changed us in the best way possible.

Jackie is the strongest, bravest, sweetest and happiest little girl. She has more fight than I knew possible and is determined to succeed. We have tried to give her everything possible to help her be the best she can, we have unsuccessfully attempted hearing aids....successfully added glasses. Work day in and day out on feedings in an effort to get rid of the tube some day. We work on mobility and communication, including both sign language and speech, not yet knowing which she will take to more. This journey has changed the path of our lives and has changed our perspective on the world - we truly get what matters, and try not to sweat the small stuff. Jackie has been such a huge blessing to our family and has had an impact on all of those around us. We are blessed.

Follow us on the journey with our beautiful daughter, Jackie, who has CHARGE syndrome.